Albert Einstein once said: “[One] who is seriously involved in the pursuit of science becomes convinced that a Spirit is manifest in the Laws of the Universe … a Spirit vastly superior to that of man, and one in the face of which we, with our modest powers, must feel humble.” 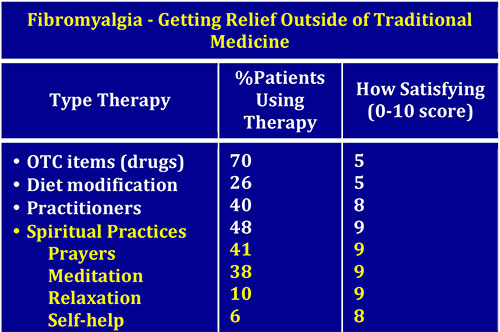 As researchers continue to explore the connection between spiritual wellbeing and health, Einstein’s words resonate with more clarity than ever before.

For example, in one large survey of fibromyalgia patients suffering from chronic muscle pain, subjects rated on a scale of 1-10 how satisfied they were with different intervention attempts.

The results in this graphic illustrate how “spiritual practices” can be successful in treating pain from fibromyalgia, and how “alternative care” can deliver more relief than conventional medicine in certain cases.

One explanation for these remarkable results is that spiritual counselors are able to help individuals reduce stress levels that directly relate to increased physical symptoms of pain and suffering.

Spirituality, in this case, does not refer to any organized religion, although spiritual experiences happen to be part of most religious practices. The opposite need not be the case.

Attempting to define the scope of spirituality is difficult and controversial. Many define spirituality as core principles, feelings, and beliefs that motivate one’s life. It centers on a connectedness between body, mind, and spirit — that while the mind alone can be used to influence the physical, it is used most effectively when it is aware of the spirit.

Spiritual health encompasses spirituality and more. To arrive at a useful definition of the spiritual health dimension, one researcher queried health professionals, health educators, health students, and many others working in different health and medical fields.

The resulting definition includes four aspects that are worth considering. (See box at right.)

The earliest medicine men and female healers also tended to be religious and spiritual leaders. Many believed they had power over the bad spirits. And since pain and suffering were considered to be of supernatural origin, these spiritual healers were best suited to treat diseases and pain. Health was tied to faith, and healing required divine intervention.

Then along came Greek physician Hippocrates (c.460 — c. 370 BC), who many consider the father of western medicine. Scientific discoveries eventually resulted in a separation between medicine and spirituality (and religion). Medicine followed a course in which healing was recognized as solely a biological or psychological process. Western medicine advanced the notion that germs or other “invading” agents cause disease and pain, thus, prevention or treatment should be based on killing or avoiding the causative agents, nothing more.

But we now know many factors contribute to disease and pain, immunity and resistance, and healing; not only organic factors but social and interpersonal factors as well. Also, we are discovering again, as the ancients knew before us, that spiritual factors play an important role in optimizing health and wellbeing.

An increasing number of physicians are forming alliances with patients and their spiritual practices to more effectively treat the whole person, and the possible root causes of disease, pain, and suffering. Many medical schools and other health-related treatment centers are now installing, as part of their training programs, an understanding of the importance of faith and spirituality in a comprehensive medical care model.

To understand how spirituality (faith) in its many forms can impact health and healing, it’s important to fully understand the idea of the “placebo effect,” which I wrote about in my October 2014 column. This effect refers to the physical changes that occur as a result of what we believe a pill, treatment, or procedure will/can do.

The placebo is a way to elicit faith and hope. If a person believes a prescribed treatment is going to work a certain way – even if it’s a sugar pill or “healing hands” – there is a greater than chance occurrence that it will be effective. In these instances, the healer is actually faith, not the pill or the hands. Research shows this belief can create the same biological changes as an active (real) treatment. This result has been demonstrated time and again.

Examples of spirituality and healing 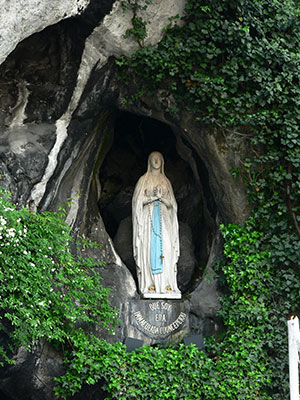 In one powerful demonstration of the placebo effect, doctors gave a drug to pregnant women suffering from severe nausea and vomiting. Patients were told the drug would make them feel better. The drug, however, was ipecac,which is used to induce vomiting. The majority of the women’s nausea and vomiting actually ceased after taking the placebo – literally counteracting the real pharmacologic action of the ipecac.

Such results even extend to surgery where sham surgical procedures (incisions made under anesthesia, but no operations performed) have been shown to be as effective as incisions with actual operations in about half the number of subjects studied. These studies demonstrate how we are able to change what happens in our bodies by altering and controlling the state of our minds. In other words, our beliefs can and do impact health outcomes!

Another example of healing and spirituality is the shrine of the Blessed Virgin Mary in Lourdes, France. In 1858 an unknown peasant girl, Bernadette Soubirous, claimed she saw the Blessed Virgin at the site. Since that time, and the discovery of “healing” springs nearby, there have been countless documented cases of people who’ve brought their faith and belief to the site, and who were cured of severe illness. Moreover, these “cures” have been shown to persist.

Today Lourdes is one of the most visited sites in France, attracting an endless stream of religious pilgrims and tourists. It is among the most important centers of tourism in the country, second only to Paris; Lourdes also is the third most important holy site among the world’s Catholics, after Rome and the Holy City. In France, only Paris, with a population greater than 2.25 million, has more hotel capacity than Lourdes, with a population of about 16,000.

The healing power of the mind

Many researchers conclude that the body’s own healing ability is actually stimulated by a person’s faith and belief in the healer and their methods, an optimistic outlook toward a given treatment, and other psychological variables that, taken together, are termed an attitude of positive spirituality.

The ability of the mind to elicit physiologic responses, even at the cellular level, is well researched and documented. Those who dismiss links between spiritual health and healing are apt to overlook a potentially powerful tool — one that could enhance their own wellbeing.