Just say 'no' to sit-ups

And say ‘yes’ to some alternatives 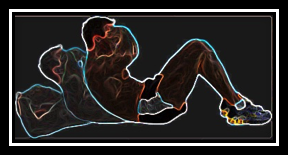 Sit-ups and abdominal crunches are the most-performed abdominal exercises. People seeking well-defined abs (aka “the six-pack”) favor them. General fitness enthusiasts (young and old) often work them into regular routines. And the U.S. Military has long included them in physical fitness programs for combat readiness.

Sit-ups are believed to strengthen the core, and thus improve athletic performance. Through the years exercise scientists have compared the sit-up to other abdominal exercises to determine whether it is, in fact, the best ab exercise or whether it might do more harm than good.

The results may surprise you. 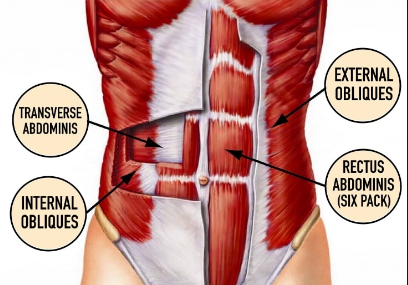 The rectus abdominis comprises upper and lower sections. It represents the major trunk flexor (action of bending the hips forward) and the most active muscle during sit-ups and curl-ups.

All sections of the rectus are activated together during the sit-up. Once force is required, the rectus acts as a cable with active tension along its entire length. Thus, training the rectus can be accomplished with a single exercise; this is not true for the internal and external obliques, as they have several compartments that are not activated in unity.

The three layers of the abdominal wall (external oblique, internal oblique, and transverse abdominis) perform several functions. Both obliques are involved in torso twisting and side bending and also play a role in lumbar (low back) stabilization and assisting with active expiration of the lungs.

The transverse abdominis appears important in assisting with spine stabilization, and along with the obliques and abdominal and lumbodorsal fascia forms a “containing hoop” around the entire abdomen to aid trunk (spine) stability and assist in many different body functions.

The other muscles engaged in trunk/spine movement and stabilization are the quadratus lumborum and iliopsoas complex, composed of the psoas major and illacus muscles. These muscles are also involved in the sit-up and other hip, trunk, and spine movements.

The traditional sit-up imposes about 730 pounds (3300 N) of repetitive compression forces on the spine with each sit-up. This represents compression forces that are equal to or exceed levels established by the National Institute for Occupational Safety and Health that link to higher injury rates, and should be avoided!
Sit-ups have been a vital component of the military’s fitness testing program since the early 1920s. Ancient history reports that warriors of antiquity performed the sit-up, seeking to build strong abdomens. However, based on objective evidence revealing a 56 percent injury rate due to sit-ups, the U.S. Military recently decided to ban sit-ups from its physical-readiness test. Moreover, the Canadian Armed Forces also recently cut the sit-up from their fitness test. Officials cited concern over potential injury and the sit-up’s lack of connection to actual military work.

Several studies document muscle activation forces and subsequent load forces on the spine during different types of exercises, including all types of sit-ups and other abdominal movements. These data indicate traditional sit-up exercises activate different muscles at levels that put excessive compressive forces on the lower back. They squeeze the discs in the spine, which can lead to low-back injuries, either acutely or over time.

Research confirms that no single abdominal exercise challenges all of the abdominal musculature while sparing the back. For this reason, more than one single exercise is required to strengthen the abs and related muscles. Unfortunately there are many inappropriate exercises that are unsafe for most people (particularly for those with low back difficulties).

The following three exercises do not help relieve back pain, but instead cause more low-back damage because of high compressive forces placed on the lower spine:

Here are three alternative exercises that activate the abdominal musculature without the high compressive forces that accompany sit-ups, leg raises, and back-extensor exercises. These exercises may look easy. They are not. They require concentrated effort. Do not do these exercises if pain occurs. Find the optimal load-stress that can be performed with proper form and proceed slowly if you have not been doing abdominal exercises.

Starting Position: Supine (lying on back) with hands supporting the lumbar region. Do not flatten back to the floor. Hands can be adjusted to minimize any pain, if needed. One leg is bent with knee flexed to 90 degrees, while the other leg remains relaxed on the floor (this adds further torque to the pelvis) to prevent the lumbar spine from flattening to the floor.

Beginner: Do not flex the cervical spine. Rather, picture the head and neck as a rigid block on the thoracic spine — no cervical motion, i.e., chin poking or chin tucking, should occur. The intent is to activate the rectus and oblique muscles and not to produce spine motion.

Leave your elbows on the floor while elevating the head and shoulders a short distance off the floor. Focus on the mid-thoracic region and keep the head and neck unit locked into the rib cage. Repeat 4-6 times.

Intermediate: Raise the elbows a couple of inches off the floor so the arms do not pry the shoulders up, thus shifting more load to the rectus abdominis as you raise your head and neck off the floor. Do not raise head and neck any higher than in the beginning curl-up. Repeat 6-8 times.

Advanced: Contract the abdominal wall to stabilize the trunk. This abdominal bracing provides resistance as you lift your elbows off the ground and raise your head and neck off the floor. Also, add deep breathing to train the diaphragm to function independently of the stabilizing abdominal musculature; the head and neck must move as one unit, maintaining their rigid-block position on the thoracic spine. Repeat 8-10 times. 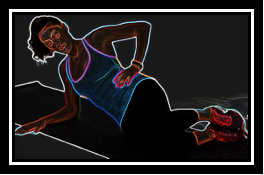 Starting Position: You should be on your side, supported by your elbow and hip with knees bent to 90 degrees. Place the free hand with fingers spread over the opposite shoulder on the deltoid muscle, or on the hips as pictured.

Beginner: Lift up and straighten the torso until the body is supported on the elbow and knee, with some support from the lower leg. Ensure the body is in a straight line. Repeat 4-6 times.

Intermediate: Starting position is the same as the beginner, except the legs are straight. Lift up and straighten the body until it is supported on the elbow and feet. To add more difficulty, perform the bridge by placing the upper leg and foot in front of the lower leg and foot. This will enable longitudinal rolling of the torso to challenge more of the abdominal muscles. Repeat 6-8 times.

Advanced: Transfer from one elbow to both elbows then to the other side while abdominally bracing, rather than hiking hips off the floor into the bridge position. Ensure the rib cage is braced to the pelvis and that this rigidity is maintained through the full roll from one side to the other. Repeat 8-10 times. 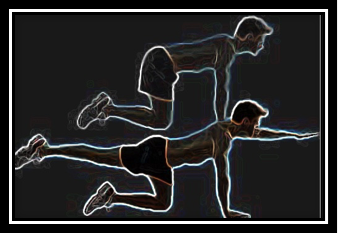 Beginner: Raise a hand or knee off the floor without pain; if possible raise the opposite hand and knee simultaneously. Repeat 4-6 times.

Intermediate: Raise the opposite arm and leg simultaneously parallel to the floor for about 6-8 seconds. Good form includes a neutral spine with no spine motion and abdominal bracing. Repeat on the other side. Complete 4- 6 repetitions and repeat with opposite limbs.

Advanced: After achieving the desired position sweep the floor with the outstretched arm and leg, then extend the active limbs back out into the bird dog position and stiffen the outstretched arm by contracting the shoulders with focus on the back muscles. Repeat on the other side. Complete 5-8 repetitions and repeat with opposite limbs.