A star is reborn 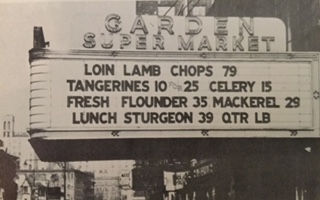 Many classic movie houses have suffered a fate similar to this. (Image courtesy of Frank Beaver.)

According to the 1947 Film Daily Yearbook, filmgoers in 1946 purchased, on average, 90 million movie tickets per week — a record high. By 1952 the weekly figure was slightly more than 50 million, marking a box office drop of nearly 45 percent. Many societal factors contributed to the decline: mass exodus to the suburbs, the introduction of night baseball and other leisure activities, and, of course, the burgeoning love affair with television.

Metropolitan and neighborhood movie houses suffered the most from these shifting trends. During the 1950s, ’60s, and ’70s, thousands upon thousands of film theaters shut down. Auditorium spaces transformed to accommodate alternate businesses or, sometimes, art and community centers.

Many small towns, already reeling from social and cultural upheaval, lost their movie venues altogether. I always think of Peter Bogdanovich’s moody, gloomy adaptation of Larry McMurtry’s novel The Last Picture Show (1971), a film set in 1951 in a fading northwest Texas prairie town with its “Royal” film house preparing to shutter its doors. 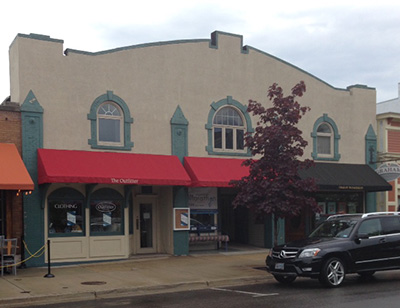 This building housed the original Lyric Theatre. Its new incarnation is just down the street. (Image: Frank Beaver.)

Opened in 1926, the Lyric’s patrons embraced the popular venue, especially since it was within walking distance for many local film fans. Ann Arborite Vicki Honeyman, BA ’74, managed the theater until it was sold and divided into spaces for a sports retailer and a real estate management company.

Honeyman had taken the management position even though she knew the theater was destined to close. “The opportunity to move to Harbor Springs and manage the lovely Lyric Theatre was a dream come true,” she says. “I knew I was hired to manage a business that was closing. That was bittersweet because I became very fond of the theater. It was lovely on the outside and perfect on the inside.”

Upon the Lyric’s closing, Honeyman returned to Ann Arbor where she oversaw U-M’s campus film society, the Cinema Guild, and later served as director of the Ann Arbor 16mm Film Festival.

Now here is the good news — the really good news — for filmgoers in the far north of Michigan’s lower peninsula. A new Lyric Theatre opened on Main Street in Harbor Springs at the end of July.

It is just a block away from its earlier namesake, and it’s a remarkable reincarnation.

Roger W. Blaser, BGS ’70, a long-time summer resident of Harbor Springs, serves as president of the Lyric Theatre. He spearheaded the creation of the 501C3 nonprofit organization that has breathed new life into the venue. Generous individuals within the Harbor Springs resort community contributed funding for the project; the Lyric also received a significant grant from the AT&T Foundation.

Tell us about your favorite classic movie house in the comments section below.
Blaser attributes his interest in movies to his undergraduate experiences in Ann Arbor.

“My interest in motion pictures really started as a result of the classic films I saw in campus venues where admission was next to nothing,” he says. “Great movies were constantly being shown: Citizen Kane, The Philadelphia Story, Casablanca, Horse Feathers, A Chump at Oxford. And then there was the Ann Arbor Film Festival. When I was at Michigan, it had only been in existence a few years. And it pushed the boundaries of what could be created in that medium.  I wish I could go back and experience it all again.”

A vision for the new Lyric 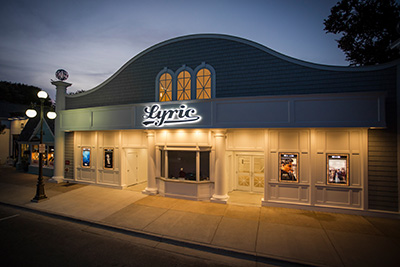 The new Lyric, in all its glory. (Image: Scott Castelein, Lake Street Media.)

Conceptually, the new Lyric differs significantly from a standard block-shaped theater, and it incorporates architectural features that are both historic and native to northern Michigan. The site is a 100-year-old building that once housed the Harbor Springs Packard dealership.

Of the theater’s exterior design, Blaser says: “I felt strongly that the building had to remain consistent with the historically important architecture in our small town, which is Shingle-style architecture. This style originated in the Eastern United States around the 1880s, eventually spreading to the Midwest, including our resort community.”

As for the interior, Blaser points out the panel design for the lobby walls, as well as the five panel interior doors and corresponding casings, are “all details used in cottage and public buildings” of that earlier era.  Also included in the lobby are pictures and memorabilia from the Packard dealership’s history from the ’30s through the ’50s. Photos of the original Lyric throughout its 55-year history also hang in the lobby.

In the various stages of research for the Lyric’s design, Blaser visited iconic movie houses in the U.S. and abroad, seeking out details that reflected neighborhood theaters of earlier times.

In East Finchley, London, he came upon the Phoenix Cinema, built in 1910. It is England’s second-oldest movie house and has a barrel ceiling that sets it apart from most theaters.

“Visually, “ Blaser says, “it just stayed with me and we found a way to incorporate a barrel ceiling into our design.”

Plenty of homegrown inspiration is apparent in the new design, as well. Michigan-bred filmmaker Michael Moore, founder of the Traverse City Film Festival, shared with Blaser his experiences renovating the State, Bijou, and Vogue theaters in Traverse City. 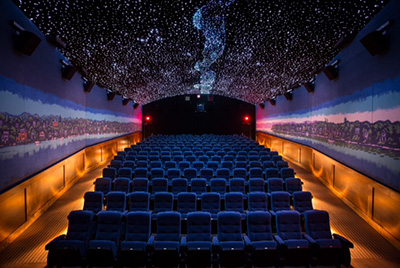 The new Lyric houses three screening rooms of different sizes and visual theme designs.  Interiors are aesthetically and beautifully conceived to reflect northern Michigan and its past.

“Our 200-seat main theater is based on a harbor theme with the idea that before the movie begins, you sense the impression that you are sitting in a boat facing due west. On the south side is the shoreline of Harbor Point while the north side is downtown and the bluff that rises above it. We took the artist, Greg Sobran, for a boat ride so he could prepare sketches to assist him in laying out the design on the theater walls.

“In that same auditorium, we asked Mary Stewart Adams, BA ’86, director of the Tip of the Mitt Headlands International Dark Sky Park Program, to help us lay out the general design. We wanted it to represent the northern Michigan sky in August pointing north, the direction in which the screen is oriented. It features the Milky Way and 13 constellations, and has approximately 35,000 stars. The fact that we have a barrel ceiling accentuates its effect since it represents the curvature of the earth.

“Our second theater, consisting of 23 seats, is the only theater of the three with a level floor. We designed it that way to mimic the experience of riding in a rail car, which is historically how most people reached northern Michigan before the 1920s. Glenn Wolff painted the mural in that theater basing it on what the interiors of some passenger cars looked like at the time.

“We haven’t yet started the art in the third theater. But it will probably feature some type of winter theme to illustrate the full spectrum of seasonal change.”

State of the art 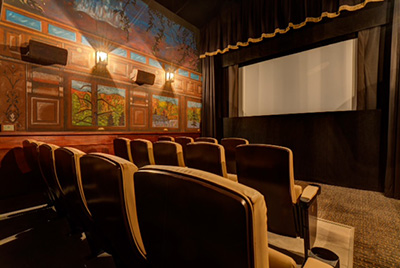 Another proud feature of the Lyric is its state-of-the-art audiovisual design, created and installed by Boston Light and Sound. Founders Chapin Cutler and Larry Shaw oversaw the work. Also of special note is the use of mohair seating in the main theater — a throwback to seat material used in cinema’s golden age. The designers tracked down the mohair fabric from outside sources and provided it to Irwin Seating Company in Grand Rapids, Mich.

Each of the three spaces also includes a theatrical curtain, which was important to Blaser.

“There is something dramatic that occurs before a movie . . . when a curtain goes up or opens from the middle,” he says. “We were endeavoring to create a place where you can see a great movie and remember our theater as part of the overall experience.”

One of the most exciting aesthetic aspects of the Lyric’s design pays tribute to motion picture history.  As one enters the lobby and proceeds toward the theaters, the lighting and walls convey a visually nuanced homage to one of cinema’s most beloved pictures. Blaser explains the subtle design:

“We used a monochromatic color scheme beginning with the building’s facade,” he says. “There are various shades of silver, white, and gray to represent a tribute to our black-and-white film heritage. That theme continues through the lobby. But once you enter the individual theaters you are met with very colorful interiors just as Dorothy did in The Wizard of Oz when the film shifted from black-and-white to color.

“We addressed film technology in the design at the same time. We placed silver metal spheres created by Mark Haines of Iron Raven Metals on top of the Tuscan column caps in the form of celluloid filmstrips including the perforations. So when you pass through the entrance and into the lobby you’ve suddenly transitioned from celluloid to digital projection.” 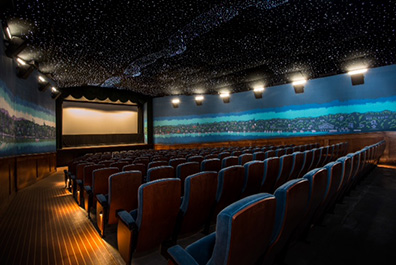 The Lyric plans to operate year-round as a unique and dynamic cultural venue in northern Michigan. Programming will include the screening of first-run films as well as documentaries, independent films, foreign films, and matinees for children. Live streaming of Metropolitan Opera performances will begin in early 2017, as Blaser hopes to expand cultural outreach to alternative audiences. The small stage in the main auditorium will accommodate lectures, Q&A sessions, and special acoustic performances. A small film festival, Blaser says, is a future possibility.

As you have probably sensed, I’m enthralled by the return of the Lyric in all of its manifestations — its historical design, its beauty, and its promise for enlivening the filmgoing experience for those of us who love to spend time “up north” in Michigan. Further, one can hope the Lyric will inspire reincarnations of other once-defunct neighborhood movie houses elsewhere. In fact, in nearby Boyne City, Mich., work is underway to re-open its theater soon.

Have such revivals taken place where you live?  I’d love to know.