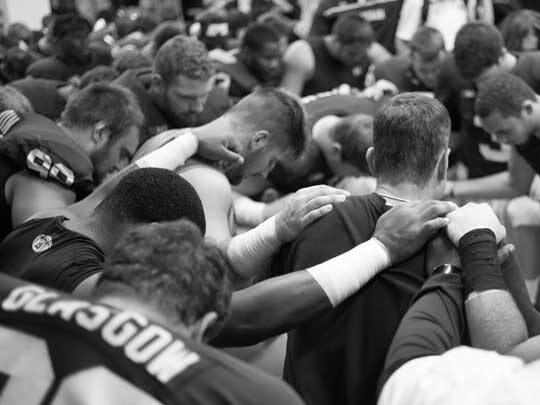 Though Michigan Today doesn’t produce “themed” issues, a recurring and unintentional thread ab0ut leadership can be found running through this most-recent tapestry of content.

In our opening story, “The artist and the athlete,” we chronicle the yearlong adventure of documentary photographer David Turnley and U-M’s head football coach Jim Harbaugh, both alumni and both exemplars of their respective professions, who collaborated on a photography book to document “the making of champions.” Few can dispute Harbaugh’s leadership qualities after reading his opening “treatise” in Enthusiasm Unknown to Mankind. He is nothing, if not focused, determined, and consistent.

In a strange quirk of timing, this issue also showcases former football player-turned-leadership coach Fritz Seyferth, who practices what he preaches about living life to its fullest. His inspiration is the naturally gifted leader and former U-M head football coach Bo Schembechler, who also mentored Harbaugh. And Seyferth’s “secret” to understanding ourselves? Journaling. This unexpected advice comes from a Michigan engineer who scored a fourth-quarter touchdown in the 1972 Rose Bowl against Stanford. Such a smart man. Listen to his words of wisdom in this new podcast, “The human science of leadership.”

Then we’ve got the beloved James B. Angell, longest-tenured U-M president, suspending nearly 10 percent of male students in 1874 for unruly behavior in “The great suspension.” Talk about standing by your principles! They don’t make ’em like that anymore.

And finally, it’s such a privilege to honor the memory of World War II naval hero Willard Vincent Nash, subject of the gripping new novel The Heart of Hell. It’s the first solo book by award-winning investigative reporter Mitch Weiss who tells the “unknown” story of the build-up to the battle at Iwo Jima. Seems our guy Nash, Class of ’35, was quite the inspiration to his men, and to Weiss.

After reading and re-reading this latest issue of Michigan Today I have to ask myself: Why the sudden and subliminal obsession with leadership?

Perhaps it’s the absurd chaos generated by the 2016 presidential election. Or maybe it’s the devastating images of stoic, bloody children being rescued from bomb-battered buildings in war-torn Syria. Maybe it’s just the quest to find meaning amid the mindless chatter of twittering, snapchatting millennials chasing Pokemon across the Diag.

Seems we’re all searching for answers to explain this mixed-up world.

But as our homegrown leadership guru Seyferth will tell you: There are no answers. Only perspectives.

Looking forward to hearing yours.