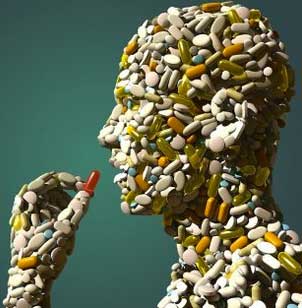 Prescription drug use and abuse is a global problem, and the U.S. is the world’s biggest addict!

We are an anxiety-riddled, depressed, and drug-seeking culture. We all just want a little relief from sadness, stress, and sorrow.

The most commonly used prescription drugs in the U.S. are mood-altering drugs – opioids and antidepressants.

People use mood-altering  prescription drugs to deal with many different psychological conditions:

There are four main classes of mood-altering drugs. Below is a generalized list of drugs that fall into the different drug classes.

Opioids — natural or synthetic — affect morphine receptors in the brain. Opioids can cause:

Sedative hypnotics range from relatively week substances (like alcohol) to very potent ones (like the “date rape” drug Rohypnol). They can be especially dangerous when used in combination with other drugs. These drugs work on receptor systems of the brain to excite and activate the brain, leading to wakefulness and anxiety. Sedative-hypnotic drugs can cause:

Hallucinogens alter perception as part of their central nervous system or brain effects and can cause a low degree of impaired judgment when users become intoxicated. Altered perceptions seem to include many different effects, such as visual distortions, spatial distortions, and loss of time perception. 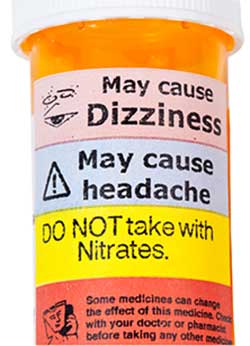 Every mood-altering drug associates with certain benefits as well as risks and warnings, i.e., adverse effects, problems, or conditions that are likely to be exacerbated when taking the medicine. Some of these problems are minor, but others can be significant.

I am not kidding. And this is not even a complete list of Cymbalta’s side effects.

In fact, additional unwanted adverse effects have been reported, ranging from difficulty swallowing, dark urine, abdominal pain, and hive-like swelling of the face to loss of consciousness, light-colored stools, skin lesions, and vomiting of blood. And those are just a few.

If the adverse effects of Cymbalta weren’t scary enough, the manufacturer also lists other possible side effects. They state on their webpage, “If you notice other effects not listed above, contact your doctor or pharmacist. Many other drugs are known to interact with Duloxetin … this includes many prescription drugs and over-the-counter medicines, vitamins, and herbal products.”

These descriptions are not unique to this drug. Almost every mood-altering prescription drug of significance has similar potential adverse side effects. Of course, most people do not exhibit serious side effects, but many do.

I don’t know about you, but I don’t want to take any prescription drug unless absolutely necessary. If possible, I want to treat any medical condition, particularly mood-related disorders, with interventions with no known adverse side effects.

Are there mood-altering medicines that have no serious, adverse side effects we can use with confidence about their documented benefits?

Yes! Physical activity is medicine and it comes with no side effects. Well, it does have some side effects. But they tend to be positive ones.

Here’s what you can expect after you start a physical activity program:

And on and on. There’s not enough room to list everything that can be improved by just a little, regular physical activity.

Since at least the 1960s, exercise scientists have studied the effects of physical activity on almost every body system. The collective evidence overwhelmingly shows that increased activity has direct and positive effects on:

The free medicine to feeling better

Physical activity costs nothing, and it feels really good. So, I want to challenge you to join me. Let’s go for a walk together – nothing outrageous, just a 30-minute walk every day. You should do this just to begin to feel better, or because it’s a beautiful day, or because you want to experience fresh air, or simply because it’s just nice to be alive – for one more day. Just go outside and walk, nothing else – and all the other stuff I list will take care of itself.

Of course, you can do more if you want!

Feel free to tweet me @whatakatch and let’s see how long it takes us to walk 1,000 miles collectively. I will update the cumulative mileage and report the results in my next column.