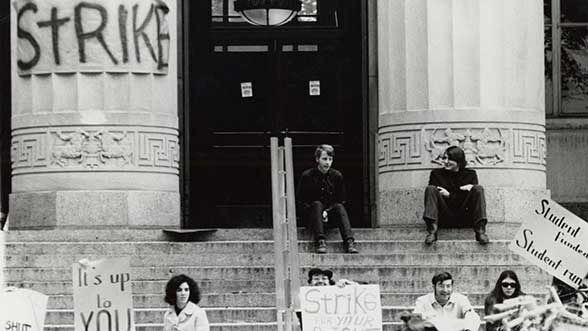 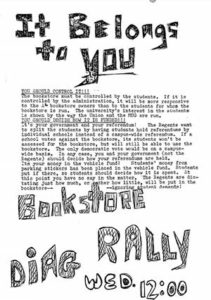 As a rule, online “comments” sections tend to be a roiling brew of off-topic negativity and ugliness. Best to avoid the trolls if you want to hang onto any slim hope that the “sun’ll come out tomorrow.”

Happily, Michigan Today’s comments section utterly defies that stereotype. Of course there’s snark to be had but, for the most part, MT commenters bring it with the anecdotes, humor, and history.

See “Battle of the bookstore” in the February 2017 edition. James Tobin flashes back to a September 1969 campus upheaval when U-M students threatened to “strike” unless the University allowed them to own and operate their own bookstore. As they met ongoing resistance from the administration and the regents, this seemingly banal request (motivated more by the pocketbook than politics) evolved into a radicalized cause, complete with sit-ins and police action.

If that’s all you read in Tobin’s document, you will get a pretty good idea of how things went down in 1969.

But if you keep scrolling, you’ll also hear from 1973 grad Dennis Affholter. He submitted a comment with information he says never appeared in the media. He recalls that reporters and Ann Arbor police had left the scene long before a notoriously “anti-hippie” force of Washtenaw County sheriff’s deputies arrived and attacked (his word) the book store advocates who still lingered on the steps of the LSA Building. Affholter took the butt of a gun to the head and fell down the stairs. He lost track of a female companion in the melee; later he learned she had an ugly run-in with the deputies and was hospitalized with multiple injuries to her head.

Affholter reports that while “city and state police had arrested ~100 people without incident or violence, Sheriff Harvey’s troops put about a dozen people in the hospital and arrested no one.”

After much negotiation, the students did get their bookstore. It operated for more than a decade — as the University Cellar (or U Cellar) — in the basement of the Student Union, and later on Liberty Street.

As for Affholter: “That night [in September 1969] was my radicalizing experience. Over a student bookstore. And because of it, I became one of those protesting hippies that the Sheriff loved to hate.”

This is all to say, my friends, always check the comments after a Michigan Today story. You never know what more you’ll find after “the end.”