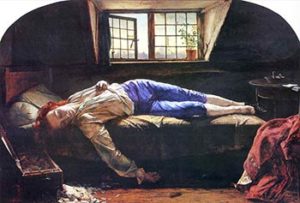 The Death of Chatterton by Henry Wallis, Tate version.

One definition of fiction is “untruth” or “lie.” One way of questioning veracity is to call a truth “poetic” or an “alternative fact.” Ours is neither the first time nor place where conscious deception abounds. There have been famous cases of fraud in print. And since my field is literature, not politics, I’d like to cite a few.

The youthful Thomas Chatterton (1752-70) — whom William Wordsworth called “that marvellous boy” — was able for a time to publish the poetry of “Thomas Rowley,” an imaginary 15th-century monk whose work he himself had composed. Fatherless and raised in poverty, the young man was greatly gifted yet unable to earn a living with his language skills. Studious but ill-connected, and without a patron, he received mere shillings for his articles and verse.

Three days after telling a friend, “. . . I have been at war with the grave for some time now,” Chatterton killed himself. Having torn up the manuscript pages on which he had been laboring, he swallowed arsenic in a London attic. Now there’s a plaque on the office building (39 Brooke Street, Holborn) that has replaced the boarding house. It bears the inscription:

In a House on this Site
Thomas Chatterton Died
24 August, 1770

As befits the high romantic mode, a young and brilliant suicide — not yet 18 —  become a paradigm for selfless devotion to art. Chatterton’s fruitless search for recognition and the scattered fragments of his verse gave rise to a posthumous legend. Wordsworth, as we have seen, “thought of Chatterton, the marvellous Boy / the Sleepless Soul that perished in his pride.” Percy Bysshe Shelley wrote of the poet in Adonais; John Keats inscribed Endymion, “To the memory of Thomas Chatterton”; the French poet Alfred de Vigny wrote a play about “Chatterton,” and Peter Akroyd published a novel of the same name.

Several songs and madrigals describe Chatterton’s tragic fate. The Italian composer Ruggiero Leoncavallo, the German Matthias Pintscher, and the Australian Matthew Dewey each produced an opera with the poet as protagonist. The English painter Henry Walls painted “The Death of Chatterton” (1856) now hanging in London’s Tate Gallery, and there’s a collection of “Chattertonia” in the British Museum. Unacknowledged during his lifetime, Chatterton is much honored after death.

Ghosts of forgeries past 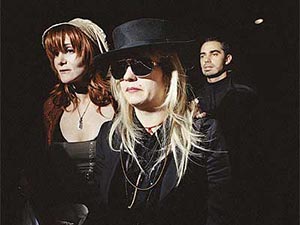 We only can guess at Chatterton’s motives. “Thomas Rowley,” it appears, elected forgery in the attempt to make a living from the work of words. He killed himself while still a teenager, so it’s at best conjectural to imagine what his poems would have looked like had he continued to write. (This holds true, as well, for the visionary French poet Arthur Rimbaud, who ceased to compose at 19.) It seems unlikely, though not impossible, that Chatterton would have deployed the language of the 15th century for the rest of his writing career; more likely, had he found an audience, he would have done so under his own name and using his own voice.

In other cases, the desire for profit comes more nakedly stage-center. There are several versions of the counterfeiter’s trade — as in the fraud of Autobiography of Howard Hughes by Clifford Irving, (1972), The Hitler Diaries (1983), and A Million Little Pieces by James Frey (2003). In the first instance the “ghostwriter” banked on the famously reclusive nature of his subject to invent a life; in the second “historical” instance the act of forgery was total; in the third the author embellished his own history to make it more lurid and therefore profitable as text. These examples have more to do with commerce than authenticity, so I shall leave them unexamined — but in each case, the author’s false representation raises the issue of legitimate ownership: How does one stake one’s claim?

The equal of Homer?

The “Ossian” scenario is a case in point. The Scottish poet James Macpherson (1736-1796) announced he had discovered a trove of ancient fragments dealing with the legendary hero, Finn MacCool. “Oisin” or “Ossian” was said to have been the hero’s son, and his translated verse gained wide international currency. He was compared to and considered the equal of Homer: a blind bard singing the story of Fingal in Great Britain’s early dark ages — a verbal treasure reclaimed. Soon enough the unknown artist became a cultural avatar and a best-selling one. Napoleon and Diderot considered him a master; so did Thomas Jefferson, who planned to study Gaelic so as to read the poems in their original tongue. The tales of love and battle and grief and joy starring “the white stranger” (Fionnghall) were everywhere applauded.

Why should an author have been so much admired when considered “true,” reviled when read as “false”? Share your thoughts in the comments section below.
In 1760 Macpherson first published Fragments of Ancient Poetry, Collected in the Highlands of Scotland, and Translated from the Gaelic or Erse Language. The next year he claimed to find an epic on the subject of Fingal, and there was a collected edition of The Works of Ossian in 1765. Macpherson argued, in his prefatory note, that his publisher had insisted on the English language — saying there was no market for the work except in English. In short order, however, the poems were translated into French and German and many other languages (Italian, Swedish, Danish, Russian, and Dutch among them). The vogue of picturesque ruins and wandering minstrels with plucked harps enlarged. The blind bard engendered a cult. Ossian was celebrated by painters and composers; at his death, his “translator” received that highest of lifetime accolades, a burial in Westminster Abbey.

But it was all a fake. Some doubted the work from the start. Samuel Johnson, among others, found both the poetry and poet unsound, calling Macpherson “a mountebank, a liar, and a fraud.” Further, he dismissed the language, asserting many men, women, and children could have composed these “forgeries.” More temperate scholars disagreed as to the legitimacy of sources — some saying it was a compilation of folk tales and oral fragments, others that the whole text was invented by Macpherson. Committees convened to establish authenticity; volume after volume disputed or defended Ossian’s art.

By now the notion of a blind bard in the Scottish hills singing songs that rivaled Homer’s has been discredited, but this leaves unanswered the question of the text itself: Why should Fingal have been so much admired when considered “true,” reviled when read as “false”?