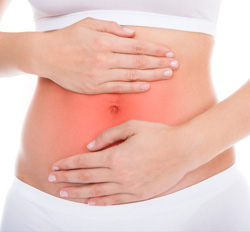 The availability of gluten-free products in the marketplace has jumped 25 percent in the last five to seven years. Most people purchase gluten-free products under the assumption that eliminating gluten from their diet is good for their health, whether or not they have been diagnosed with a gluten sensitivity.

Gluten is safe for everyone, except those who have some variant of irritable bowel syndrome (IBS). Several conditions are listed under the IBS “umbrella.” These include celiac disease, gluten allergy or sensitivity, lactose intolerance, specific wheat intolerance syndrome, small intestinal bacterial overgrowth, and short-chain carbohydrate sensitivities. (See “FODMAPs” below.)

Sales of gluten-free products reached $15 billion in 2016, a 50 percent increase over 2013, and there appears no abatement of this exponential increase.

How did we get here?

In 2011, Australian researchers found gluten caused gastrointestinal distress in some individuals without celiac disease – a clinical condition now referred to as nonceliac gluten sensitivity or NCGS.

This double-blinded, randomized, and placebo-controlled experiment was one of the strongest pieces of evidence that NCGS – also called “gluten intolerance,” was a genuine condition. The press highlighted this study, which contributed to the meteoric sales of gluten-free food. 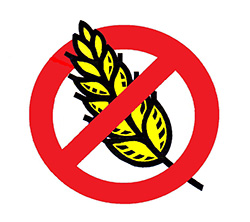 However, a follow-up experiment by the same researchers produced different results. This time the scientists used more rigor to control other variables that might cause adverse gluten reactions. In this experiment, they controlled or removed all potential dietary triggers for gastrointestinal symptoms, including lactose (from milk products), certain preservatives like benzoates, propionate, sulfites, and nitrites, and fermentable, poorly absorbed short-chain carbohydrates.

Participants included 37 people who did not have celiac disease, but who said their GI symptoms improved on a gluten-free diet.  Subjects ate one of three diets that included either high gluten (16 grams per day), low gluten (2 grams per day) or nongluten (placebo). Each subject shuffled through each diet so they could serve as their own controls, and none knew what specific diet he or she was eating. Results from this experiment revealed that each diet, whether it included gluten or not, prompted subjects to report a worsening of GI symptoms. Reported levels of abdominal pain, bloating, nausea, and gas all increased, even with the placebo, nongluten diet.

These data indicated a nocebo effect – when a negative expectation of a phenomenon causes it to have a more negative effect than it otherwise would. In essence, individuals reported GI distress without any apparent physical cause. The participants expected the diets to make them sick, and they did.

The above findings led the researchers to retract conclusions from their first experiment. They stated, “In contrast to our first study . . . we could find absolutely no specific response to gluten.” Results of this follow-up experiment were not covered in the press, of course.

Why do people choose gluten-free options?

In a 2015 survey, more than 35 percent of all people who purchased gluten-free products said the reason for spending the extra money for these specialized items was . . . “No reason at all!” In fact, in this study only 8 percent or less of people who chose gluten-free products did so because of celiac disease or a verified gluten sensitivity or allergy. 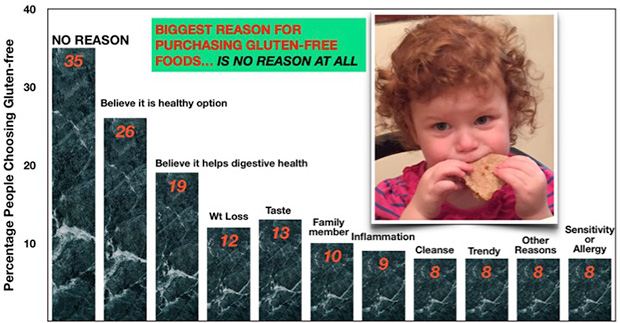 Why should one avoid gluten?

The rise in nonceliac gluten sensitivity seems predominantly driven by consumer and commercial interests, not quality research!
Celiac disease, which affects an estimated 1 in 133 Americans, represents the most severe form of gluten intolerance. First-degree relatives of people with celiac disease – parents, siblings, and children have a one in 10 risk compared to one in 100 in the general population. Celiac disease represents an autoimmune disorder where the body treats gluten protein as a foreign invader and attacks the gluten, as well as the lining of the gut where gluten resides after ingestion. Celiac disease affects men and women of all ages and races. It is estimated that 83 percent of Americans who have celiac disease are undiagnosed or misdiagnosed with other conditions.

The most common symptoms of celiac disease are digestive discomfort, bloating, diarrhea, constipation, headache, tiredness, skin rashes, depression, weight loss, and foul-smelling feces. Some people with celiac disease do not have digestive symptoms, but may have other symptoms like tiredness or anemia.

Irritable bowel syndrome (IBS) is a group of symptoms similar to gluten intolerance— including abdominal pain and changes in the pattern of bowel movements but without any evidence of direct underlying small-intestine damage. Common among people with IBS are such afflictions as anxiety, depression, and chronic fatigue syndrome. Whether these are causes or results of IBS is not clear. Nevertheless, studies show many individuals with IBS benefit from trying a gluten-free diet.

In susceptible individuals, when FODMAPs are consumed they draw in water and produce carbon dioxide, hydrogen, and/or methane gas that cause the intestine to stretch and expand, often resulting in abdominal pain, bloating, visible abdominal distension, and other symptoms, similar to symptoms to celiac disease.

Are you gluten sensitive?

Digestive discomfort to certain foods represents the most common indication of gluten intolerance. Screening for celiac disease involves blood testing to screen for specific antibodies, the most common is the tTG-IgA antibody test. If positive, a tissue biopsy is usually recommended to confirm presence of celiac disease. 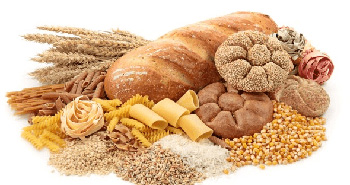 Wheat is one of the main staples of a western diet and is public enemy No. 1 for those with gluten intolerance. In addition to pure wheat, all of its forms also should be avoided. These include:

Gluten presents in other ingredients as well:

For baking, use these flours: