Shop around the corner 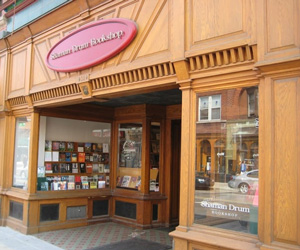 For a bookish person, there are certain sacred spaces — a private library, a public library, a reading room. By “sacred” I mean central, crucial, special,and the religious overtone is intentional; there are those of us for whom the word is both a beginning and end.

“In the beginning was the word,” as the “Good Book” announces, and “In my end is my beginning,” as T.S. Eliot asserts, in his Four Quartets. Between those two polarities a lifetime of reading extends . . .

One more such space goes by the name of “bookstore,” and its incarnations are various. A mile from where I write this (in the small Cape Cod village of Wellfleet), there’s a hole-in-the-wall that calls itself, literally, “The Bookstore.” It sits 200 yards from a salt-water bay, and wind and weather pummel it. Inside the shingled structure, tall jumbled stacks of paperbacks and hard-cover editions are salt-thumbed and wetly self-adhesive. You turn a page at risk. Most books cost a dollar, but there are hidden treasures: from behind a pile of comic books peeps a presentation copy of Henry Beston’s The Outermost Houseor a 1910 handwritten compilation of Wildflowers of the Cape. 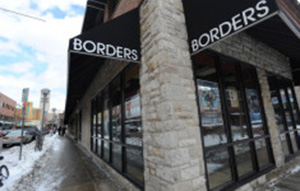 Borders opened its doors in Ann Arbor in 1971. This flagship store closed in 2011. (Image: annarbor.com.)

Elsewhere, and in shopping malls across the nation, more modern establishments sell coffee, trinkets, and greeting cards, with piped-in-air and no used books on shelves. Ann Arbor once was home both to a splendid independent bookstore, Shaman Drum, that closed its doors in 2009, and the flagship of a fleet that enlarged into the chain of Borders Books. Founded in 1971, that company went bankrupt in 2011, so all this is yesteryear’s news, but those of us who walk down State Street or Liberty still mourn their present absence.

In the way of such things, however, new shops spring up phoenix-like and are from the ashes reborn. In Ann Arbor, Nicola’s Books and Literati fill the independent “niche,” and Barnes & Noble serves the mass-market purchaser. Second-hand bookstores continue to sell used and rare editions, and mail-order companies thrive. So though we writers and teachers may bewail the loss of literacy, it’s the larger truth that bookstores have not vanished from the marketplace, and those who take pleasure in staring at shelves — trying to decide which title to pick from the legion of covers so alluringly arrayed and clamoring silently for our attention — still have a world of choice.

When I think about bookstores, I think (as do most of us) about a specific not general place: the vast Strand Bookstore in New York City, the enormous Powell’s in Portland, and smaller examples from coast to coast. This particular one comes from decades past — the Owl Pen, in Greenwich, NY. Greenwich is a farming town in Washington County, and for years I lived there while teaching at Bennington College in the southwest corner of Vermont. “Remote” is not the word for it; the nearest creatures were chickens and cows, and I could tell there were houses nearby only from their chimney smoke. Men on tractors passed our door more frequently than men in cars, and it was a 10-mile excursion for a quart of milk. 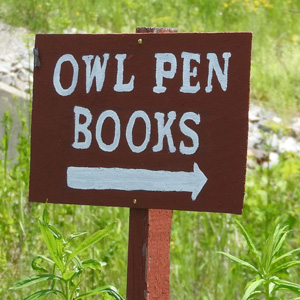 One of the author’s favorite shops in Greenwich, NY. (Image poststar.com)

It was, therefore, an astonishment to discover — one bright autumn afternoon when my wife and I went walking down a dirt track labeled “Riddle Road” — that there was a flourishing bookstore not a mile from our own home. It was housed in a series of barns. Their website now claims 100,000 volumes are available for purchase, but when we frequented the Owl Pen in the early 1970s there were no websites and far fewer books. The place still reeked of its previous use. A large hay-barn contained the bulk of the merchandise, where hay-motes danced in wan afternoon light; from the milk-barn there arose a damp residue of manure and milking smells. Even the three-hole outhouse had been refurbished with shelves. “Collector’s Editions” stayed warm and dry in the house. Two retired librarians owned the place, and its outer walls had hay-bales lining the foundation to keep back wind in winter. The owners of the Owl Pen would hunt down volumes long before the Internet made the task a simple one, and if you asked for X or Y it lay often as not in the back room, or beside a lawnmower in the third shed by the stream . . .

I was a grazer, not a focused-feeder, and would buy books on impulse: a 30-volume set of writings by William Makepeace Thackeray because I liked the binding, a five-volume history of the Dutch Republic because I liked the detailing on the inside page, a book by a poet I’d not yet read in the hope I might someday get around to her work, a tract on “The Forgotten Art of Stone Wall Building” because our own stone walls needed rebuilding and lay in disarray. 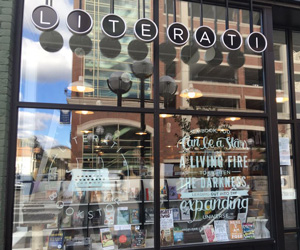 All these decades later, I still can smell the dust in the air, feel the wind through wide red planking, taste the lukewarm coffee from the rusting metal urn. I see the long tables with high heaps of books and hear the low mutter of other customers browsing an aisle or two distant. I remember the elation with which — hey, presto! — I discovered a novel that someone at last Thursday’s dinner had praised, and how for five dollars it soon would be mine. The Owl Pen stayed a well-kept secret, and the road it fronted was barely wide enough for a single car. Two would make a traffic jam. Often enough, when walking there, we found white-haired elders backed into a drainage ditch while a departing customer inched precariously past.

In my mind’s eye, I stand there still, holding a bag with my just-purchased texts: a novel, a book about trees. There’s the promise delivered of language at hand, the knowledge that — next afternoon or evening or year — I would have a chance to read what the bookstore had stored. And to be grateful for it in time and times to come.