You can't outrun your diet

Throughout my 45-year academic career as an exercise physiology research professor at the University of Michigan, including founder and director of the Weight Control Clinic, I counseled hundreds of adults on how to increase physical activity to lose body weight and fat. 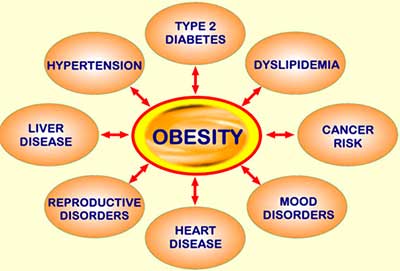 At the time, the sensible argument that a sedentary lifestyle was the major culprit of excess weight gains seemed self-evident. Faced with relatively few physical demands, modern-day humans burn fewer calories than we consume. Hence, we store unspent calories as body fat. Even the World Health Organization, in discussing the cause of obesity, cited a “decrease in physical activity due to the increasingly sedentary nature of many forms of work, changing modes of transportation, and increasing urbanization.”

The above hypothesis seems reasonable, and experts have spent tremendous resources in efforts to increase levels of physical activity amongst different populations. However, barring a few exceptions, most of the exercise/weight-loss data, whether collected on a few individuals or large groups, has failed to prove that hypothesis. It leads one to question whether decreased energy expenditure, per se, represents the cause of increased weight gain.

And so the debate about the global obesity “pandemic” — and how to resolve it — continues. One of every three people worldwide is overweight, and one of every eight is obese! The attendant health risks of being overweight or obese include type 2 diabetes, cardiovascular disease, and certain cancers, as well as countless other negative health issues.

I can say that, based on recent data and new hypotheses, I have changed my view on whether energy expenditure (exercise) or energy intake (diet) is more important for weight loss. As the title of this piece says, “You can’t outrun your diet.” 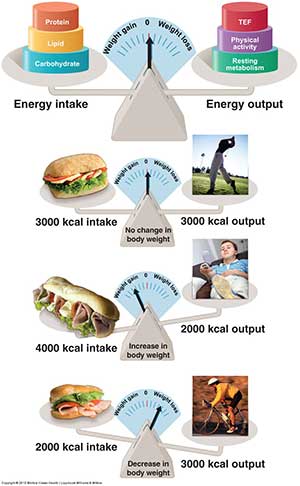 We know the “mathematics” of weight gain expresses as an energy imbalance, with food energy intake (calories per day) necessarily exceeding total energy expenditure (calories per day). This energy imbalance, favoring energy storage (in the form of body fat), is thought to result from our Western lifestyle, where physical activity levels and food intake deviate substantially from conditions under which our metabolic physiology evolved.

It is unclear whether obesity results from modern conveniences and mechanization leading to decreased physical activity — and hence lower total daily energy expenditure — or from systematic increases in energy-dense food intake.

Determining which aspects of the Western lifestyle are aberrant and pose the greatest stimulus for weight gain and obesity is complicated by conflicting and limited data on nonWestern populations. Until recently, we lacked comparative data on hunter-gatherer societies’ daily diet and energy expenditure, to try and tease out exactly what factors contribute most to the growing obesity crisis. For example, while Western diets are certainly more sugar-rich and energy-dense than more ‘‘traditional’’ diets that include wild foods, corroborative data are limited. Similarly, we automatically assume high physical activity levels for our paleo hunter-gatherer subsistence ancestors, but actual metabolic measurements are lacking.

Finding an answer: The Hadza experiments 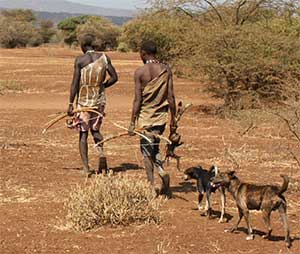 Hadza natives embark on a hunt.

The Hadza, or Hadzabe, are an indigenous ethnic group of hunter-gatherers living in the savannah-woodland environment of Northern Tanzania. The Hadza are considered descendants of Tanzania’s aboriginal hunter-gatherer populations and probably have occupied their current geography for thousands of years, with relatively little modification to their basic way of life. Their lifestyle is similar in most ways to those of our Pleistocene ancestors. They hunt and gather on foot with bows, small axes, and digging sticks, without the aid of modern tools or equipment (e.g., no vehicles or guns).

As in many other forager societies, gender differences play into foraging efforts. Hadza men hunt game and gather honey, while Hadza women gather plant foods. As is typical among traditional-living Hadza, more than 95 percent of their calories come from wild foods, including tubers, berries, small- and large-game, baobab fruit, and honey.

In a series of experiments with the Hadza, researchers measured total energy expenditure (TEE), body composition, and food intake and compared results to similar data from Western populations. Researchers also measured subjects’ resting metabolic rate and daily walking distance using wearable GPS devices. Given their physically active lifestyle, one would expect the Hadza have lower body fat than people in Western populations. Further, if current models for obesity are correct, the Hadza, with their natural diet and lack of mechanization, should expend more energy than individuals living in Western economies with comparatively sedentary lifestyles and highly processed, sugar- and fat-rich diets.

Even dramatic differences in lifestyle may have negligible effects on total energy expenditure. This is consistent with the view that differences in obesity result primarily from differences in energy intake rather than energy expenditure. You cannot “outrun” excess caloric intake!
Results from these studies appear to contradict current weight gain theories. The data reveal the Hadza to be highly active and lean, with body fat percentages on the low end of the normal healthy range for Western populations.

Despite huge differences in the amount of activity energy expended, it is telling to note the number of total daily calories the Hadza burn was indistinguishable from that of typical adults in Europe and the U.S.

The only way the Hadzas’ bodies have adjusted to higher activity levels required for hunting and gathering is by spending less energy on other metabolic activities, resulting in the same daily total energy expenditure as more sedentary individuals.
How can the Hadza be more physically active than we are without burning more total calories? Could it be that their bodies are more efficient, allowing them to do more work with less energy expenditure? Sounds reasonable. But results of additional experiments tell a different story.

To successfully attack obesity in the long run, we need to focus on our diet and reduce the number of calories we eat. Specifically, we must avoid highly processed, energy-dense but nutrient-poor foods that contribute excess calories to our diet — more than we can burn off through normal daily activity.

We gain weight and body fat because we eat too much, not because we’re too sedentary. Physical activity is vital for maintaining physical and mental health, as I have detailed in many of my Health Yourself columns, but we are not going to exercise our way out of the obesity crisis.