Can foods cause chronic disease?

Most chronic diseases incubate over years, not overtly expressing until reaching a critical horizon, often in mid-to-late adulthood. Only after years of incubating do the invading forces unleash their devastation. Whether it’s diabetes, heart disease, Alzheimer’s, sarcopenia, arthritis, or any of the other chronic diseases, we are shocked when we “suddenly” become afflicted. With surprise and fear we cry, “How did this happen to me?”

Guess what? Precursors for most chronic diseases have been there for years, just waiting to erupt. 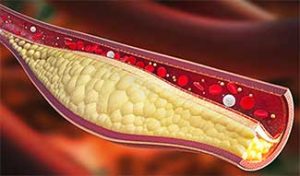 Inflamed arteries are common in heart disease. When fats build up in coronary artery walls, the body produces inflammatory chemicals which can, over time, trigger a blood clot that can cause a heart attack or stroke.

We now understand that various inflammatory processes – part of the complex biological response of body tissues to harmful stimuli, such as pathogens, damaged cells, irritants, and toxins – commonly represent the “silent” markers of chronic disease.

The word “inflammation” traces back to the Latin for “set afire.” In some conditions, like rheumatoid arthritis, there are expressions of heat, pain, redness, and swelling. In other cases, like early-onset aging, heart disease, Alzheimer’s, and type 2 diabetes, inflammatory signs are not so obvious. Without sophisticated medical tests, it’s difficult or impossible to know the full extent of inflammatory processes that eventually lead to expressions of a chronic disease.

As these long-term inflammatory processes incubate in the body, waiting to be vented, they may begin to reveal themselves as diabetic-induced shock, signs of early onset Alzheimer’s, or symptoms of inflammatory bowel disease (ulcerative colitis and/or Crohn’s disease). Or, they could manifest as joint pain.

Toxicity represents the degree to which a substance, usually a chemical or a mixture of substances, can damage an organism (animal, bacterium, or plant), or a substructure of an organism, such as a cell (cytotoxicity) or an organ like the liver (hepatotoxicity).

Effects of a toxin are dose-dependent. Thus, even water can lead to water intoxication (hyponatremia) when taken in too high a dose. Toxicity is species-specific, making cross-species analyses problematic.

There are four types of recognized toxins: chemical, biological, physical, and radiation.

Advanced glycation end products, or AGEs, represent an assorted group of large molecules formed by the process of glycation, which involves bonding of a sugar molecule, such as glucose or fructose, to a protein or fat molecule without help from enzymes. The resulting macromolecules (AGEs) are considered biologic toxins that associate with such issues as diabetes, aging, chronic kidney disease (CKD), anemia, poor skeletal muscle strength and performance, cardiovascular disease, and brain and bone disorders, just to name a few. The figure below shows the many AGEs-induced chronic-disease conditions that reduce longevity. 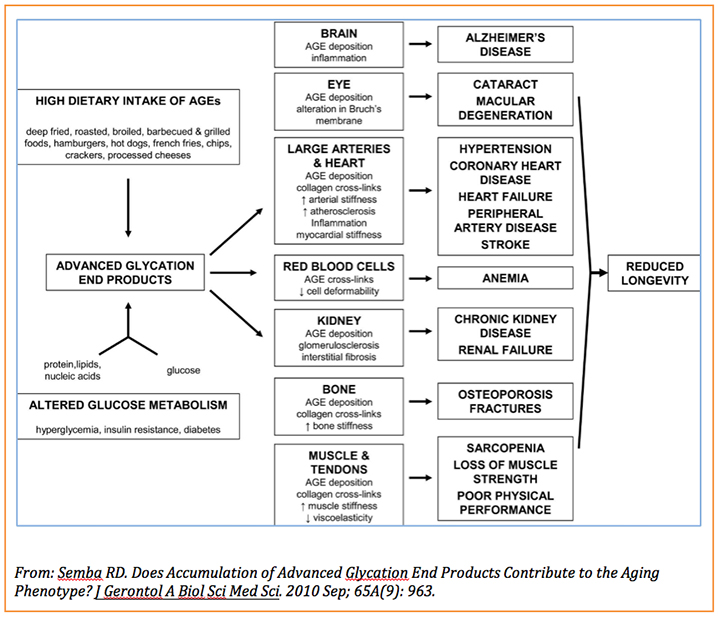 Humans are exposed to two main sources of AGEs: endogenous AGEs formed within the body, and exogenous AGEs ingested from foods.

There is not much we can do about endogenous AGEs that generate mainly in the bloodstream from small proportions of the absorbed dietary simple sugars glucose, fructose, and galactose. Since fructose has about 10 times the glycation activity of glucose, it is believed to contribute more than glucose to endogenous AGEs’ inflammatory processes. Some endogenous AGEs are benign, but others are more reactive than the sugars from which they are derived, and thus are implicated in many age-related chronic diseases. For example, elevated endogenous AGEs have been implicated in cardiovascular diseases (where endothelium, fibrinogen, and collagen are damaged); Alzheimer’s disease (where amyloid proteins are side-products of reactions progressing to AGEs); cancer (where acrylamide and other AGE side-products release); peripheral neuropathy (where myelin – a fatty white substance that surrounds the axon of some nerve cells is attacked); and other sensory losses such as deafness (due to demyelination). 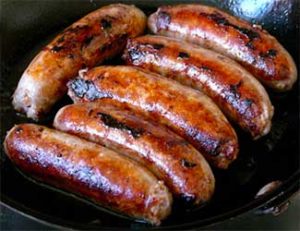 Until recently, it was thought that exogenous glycation-derived AGEs were negligible contributors to inflammation and disease development. This conclusion was almost entirely based on animal research. Recent research on humans, however, has shown this not to be the case.

Moreover, food manufacturers have added AGEs to foods in the form of flavor enhancers and colorants to improve appearance. Foods with significant browning, caramelization, or directly added preformed AGEs can be high in these compounds. Foods with very high exogenous AGEs include donuts, barbecued meats, cake, and dark-colored soda pop.

Try to reduce or eliminate foods and cooking methods that associate with the highest levels of AGEs. In this respect, a plant-based diet appears optimal.
The number of scientific publications on AGEs has increased astronomically in the past decade. There is now convincing human evidence from in vitro studies, animal models, clinical and pathological studies, epidemiological human cohort studies of aging, and human clinical trials that limiting AGEs promotes reduction in inflammation and oxidative stress, and thus improves health and longevity.

The table below is sourced from an article in the Journal of the American Dietetic Assn. It presents examples of the AGE enzyme activity for different foods. AGE enzyme activity expresses as kilounits (kU) per 100 grams of a food (column 1) or as AGE enzyme activity in kU units per food serving (column 2). The serving size expresses as grams (g) for solids; millileters (mL) for liquids. (A more comprehensive list can be found at the Journal of the American Dietetic Assn.) Not surprisingly, on a comparative basis, animal-based foods contain the most exogenous AGE activity.

Editor’s Note: This article was edited after publication to clarify the contents of the chart about the ways AGEs present in foods. In addition, the term for ‘water intoxication’ has been corrected.