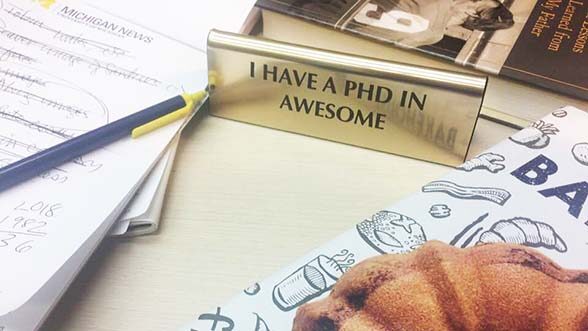 At the Michigan News holiday gift exchange in December, I received the booby prize from the one staffer who did not get the memo that gifts were supposed to be “serious.” So instead of the coveted bottle of high-end booze or the fancy French Press, I tore open the tissue paper to find a plastic desk placard that reads: “I have a PhD in Awesome.”

Initially I was aggravated. I’d brought a lovely essential oil diffuser — chosen by the one person on the staff who clearly did not want it — and I felt ripped off. But after some serious self-reflection I came to appreciate my gift far more than a boring bottle of wine or a $20 Starbucks card. It’s a conversation starter, after all. It’s hilarious. And it will last forever. Plus it looks great in my cinderblock office, which in many ways resembles that of a twisted high school counselor. (I should note that my co-worker quickly realized the error of her ways and soon after gifted me with a beautiful bottle of wine and a package of pasta from Eataly in Chicago. I’d venture to say, she has the PhD in awesome.)

Now, “awesome” is one of those overused words that no longer retains its wholly original awesomeness. But that’s OK. Because I can guarantee you will find something awesome in this issue of Michigan Today. Not only did I talk to Gordie Howe’s prince of a son, Murray, I received an incredible cookbook in the mail, penned by Zingerman’s Bakehouse co-owner Frank Carollo. (Can’t wait to make my own Zingerman’s Magic Brownies.)

Meanwhile, my writer Jim Tobin delivered a story on a fascinating professor by the name of Hereward Thimbleby Price, which sounds like a character in “a cozy English mystery.” Or, I might add, in a book by Chris Van Allsburg, the author of Jumanji, the Polar Express, and other treasured books of childhood.

And that’s just scratching the surface. I’m telling you, this new issue really is pretty awesome, right? I mean, come on, I should know. I do have a PhD in the subject.