One of a kind

Overheard at the Fifth Avenue Parade:  “Look, Mabel, my Johnny’s the only one in step!” 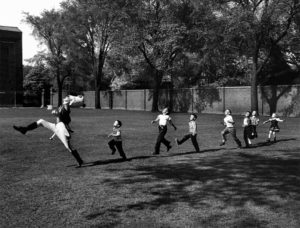 That “different drummer” of whom Henry David Thoreau wrote is often, if not always, out of step with his or her compatriots; the black sheep in the herd of white, the stranger in a crowd. Yet it’s not necessarily true that the outlier or contrarian is worth the watching or listening to. To call a person “one of a kind” feels double-edged.  Depending on intonation, the phrase may be a compliment or insult. Context is all.

Take criminal behavior. The mass murderer or psychopath is routinely described as a “loner,” raging against societal norms. Indeed the term can be employed in a legal defense strategy for those whose behavior is aberrant, and it’s one of the ways in which genius and madness may be made to seem akin. Transgressive action can be self-destructive as well as destructive of others, and psychological derangement (as with the poets Friedrich Hölderlin or Arthur Rimbaud) is nearly commonplace. François Villon and Jean Genet — the former in the 15th century, the latter 500 years later — are honored in part not despite but because of their having been jailed. Entertainers are habitually celebrated for hard-drinking, drug-taking excess, and the greater the risks run the larger the reputation. 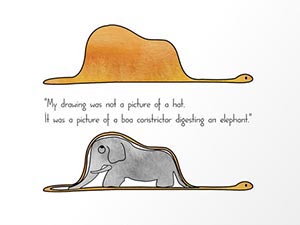 Is it a hat? Or a boa constrictor digesting an elephant? (The Little Prince, Reynal & Hitchcock, U.S.)

In terms of art, moreover, to have an “original” vision is almost always praiseworthy, if only long after the fact. Most writers we read and admire were once construed as ground-breakers, iconoclasts, or some other label for against-the-grain inventiveness. The writer who stays within and codifies accepted practice seems somehow less admirable than the one who strays. This is a case-by-case circumstance and shaky general assertion, but it nonetheless feels fair to say that we as a culture exalt innovation and those who break the rules. Or those who look afresh and with innocent eyes. Take the celebrated example of Antoine de Saint-Exupéry’s Le Petit Prince, where a hat on the ground looks to the Little Prince like a boa constrictor digesting an elephant. All adults reading the story construe it to be a familiar hat-size shape and simply a piece of apparel; to the child — who sees with his heart, not eyes — the snake and swallowed pachyderm come clear. 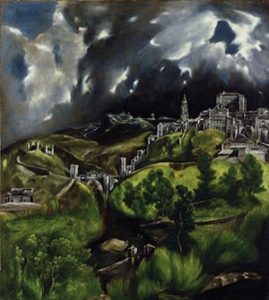 In the visual arts such “ways of seeing” — to borrow a phrase from the critic John Berger — can be physical or physiological as well as creative or willed. El Greco’s elongated figures and mannerist gestures may have been a simple function of astigmatism. Had the artist worn glasses with the correct remedial prescription, his “Christ Healing the Blind” or “View of Toledo” might not have seemed extreme. What looks contorted to a modern eye may have been, to El Greco, a realistic representation of the body or sky under stress. Had Claude Monet’s vision not degenerated over time, we might not have had the series of water lilies collectively known as Nymphéas; his luminous delineations of the pond behind his house owe at least a little to the cataracts that afflicted the artist in old age. Jackson Pollock’s reputation rests almost entirely on his action paintings, which have no obvious precedent. The stage-by-stage preliminaries (from his years as a student of Thomas Hart Benton through his experiments in abstract expressionism) now seem derivative. It’s as though he were born with a dripping paintbrush and overflowing can of paint in hand, but in fact the “great leap forward” had been practiced step by step.

In music much the same holds true. Arnold Schoenberg and Duke Ellington, to name just two of the “originals” of 20th-century composition, made experimental innovations in a system established earlier. The blind Ray Charles or the jazz masters Charlie Parker and Charles Mingus each had antecedents, and it takes nothing away from their startling-seeming originality to know it took time to mature. Beethoven’s late string quartets, we think, owe their other-worldly dissonance to the composer’s failed hearing; when he lost all aural connection to the “outer” world, “inner” harmonies came clear. These are well-worn and widely cited examples of the linkage between ordinary limitation and extraordinary expressiveness, both of eye and ear.

Perhaps the single most famous use of the term, “original,” attaches to a book we now construe as seminal. Charles Darwin’s The Origin of the Species changed the way that homo sapiens considers its own origin, and has forever altered how we think of ancestry and, as it were, originalism. This latter term has been coined by those who think our nation’s “Founding Fathers” were in all things irreproachable, and there are still a few believers in immutability. They say — in error, I believe — that nothing has changed or should change. But Darwin’s daring proposition is that life (and, by extension, thought and art) evolves.

It takes little or nothing away from the concept of originality to suggest it too has origins.
My argument, therefore, comes down to this: Original work is evolutionary and has antecedents, no matter how it vaunts itself as new. “Imitation” and “originality” are at their base conjoined. Most manifestos claim (think of Filippo Tommaso Marinetti’s Futurist Manifesto or Gustav Klimt’s Vienna Secession) that what they say or how they paint has not been said or done before. It’s important to the innovative artist to stand in opposition to the reigning taste and fashion of the time. But progress is reactionary in the root sense of reaction; it requires an established system to oppose. The thesis and antithesis that Hegel famously defined as “dialectical materialism” is in this regard representative: The synthesis produced is something new until it, in turn, grows old.

I’m aware that there are many names in the preceding paragraphs (Darwin, Hegel, Klimt, Marinetti) and I list them to suggest the phenomenon’s breadth. It takes little or nothing away from the concept of originality to suggest it too has origins, and each synthesis began as thesis until it was opposed. The “original” artist breaks new ground, but on a trodden path.To go where none has gone before is to continue walking, working, for no explorer starts at journey’s end.