The anti-aging effects of exercise

Growing older all the time 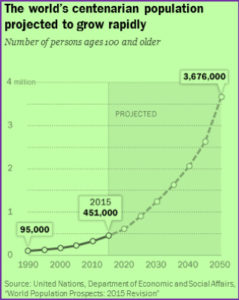 The number of people on earth who are 60 years or older will nearly triple by 2050, with the “oldest old” age group (>85 years) being the most rapidly expanding segment. And while centenarians comprise a small share of the world’s older population, their numbers also are growing. In 1990, there were 2.9 centenarians for every 10,000 adults worldwide ages 65 and older. That share grew to 7.4 by 2015 and is projected to rise to 23.6 by 2050. As the graph to the right demonstrates, we are becoming, slowly but surely, an aged population.

To maintain functional independence during aging depends directly on an individual’s physical fitness. In this context, physical fitness defines as “the ability to carry out daily tasks with vigor and alertness, without undue fatigue, and with ample energy to enjoy [leisure] pursuits and to meet unforeseen emergencies.” In turn, increases in physical fitness depend mainly on different aspects of cardiorespiratory and muscle function.

Aging: It’s not a pretty picture

Maintaining one’s independence as long as possible is one of life’s greatest challenges. But aging impacts body function, bringing negative changes in various biologic systems that threaten such independence.

The table below comes from Rejuvenation Research; 18(1):2015. It summarizes the effects of aging on our bodies. Note the many multi-organ systems that decline with normal aging. The aging effects on cardiorespiratory and muscle fitness, alone or in combination with other progressive losses of structure/function/death of neurons, can result in the “frailty syndrome.” Frailty includes muscle weakness, slow movement patterns (low walking speed), low levels of physical endurance, low energy or self-reported exhaustion, and unintentional weight loss.

Frailty represents a growing problem in western populations because it potentially affects 20-30 percent of adults older than 75 years. Frailty usually results in disability and loss of independence as it becomes difficult to carry out the activities of daily living.

Sarcopenia (muscle loss) links with increased disability, falls, hospitalization, nursing home admission, and mortality.
A person’s total amount of muscle usually starts to decline after age 25. On average, 40 percent of muscle mass is lost by age 80! This quantitative loss in cross-sectional muscle area represents a major contributor to decreases in muscle strength observed with aging. The term ‘sarcopenia’ refers to this age-related loss of muscle mass with loss of muscle strength. I discussed sarcopenia in a previous Health Yourself post.

Muscle loss decreases one’s physical endurance and ability to perform tasks of daily living, i.e., the ability to lift, carry, or move objects, or the ability to successfully lift one’s body in climbing, stepping, or moving to avoid hazards.

Maximal oxygen uptake (VO2max – referred to as maximal aerobic capacity, aerobic capacity, or aerobic endurance) is a main indicator of overall cardiorespiratory fitness. While there is variability among studies, the average rate of VO2max decline in older people is progressive and precipitous, amounting to about a ± 10-15 percent decline per decade. Also, the amount of blood pumped by the heart per minute (cardiac output) and the amount of oxygen that muscle can extract from the blood both decline at about the same rate as the VO2max. 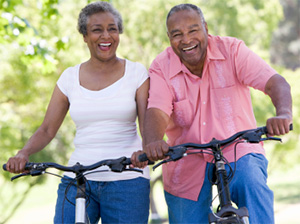 Exercise need not be a structured activity. (iStock.)

The evidence is clear: Increased physical activity during aging is vital to protect a person’s ability to maintain an independent lifestyle. A physically active lifestyle includes increased amounts of total body movements, resistance training, and reduced amounts of sedentary behavior.

Research concerning lifestyles and exercise habits of 17,000 Harvard alumni who entered college between 1916-1950 showed only moderate aerobic exercise, equivalent to walking/jogging three miles per day, adds healthy years to a person’s life. Men who expended 2,000 kcal per week exercising had up to one-third lower death rates than classmates who did little or no exercise. To achieve a 2,000 kcal energy output weekly requires a daily 30- or 45-minute brisk walk or a moderate run, cycle, swim, cross-country ski, or aerobic dance movement. The following summarizes the results of the long-term study of physical activity and aging:

Researchers monitored two groups of sedentary people between 36-60 during a two-year clinical trial. One group exercised vigorously for 20-60 minutes by swimming, stair stepping, walking, or biking at a fitness center up to five days per week. The other group incorporated 30 minutes per day of “lifestyle exercises” such as extra walking, raking leaves, stair climbing, walking around in general, and participating in a walking club most days of the week. For each of the programs, the intervention consisted of six months of exercise followed by 18 months of maintenance. At the end of 24 months, both groups showed similar improvements in physical activity, cardiorespiratory fitness, systolic and diastolic blood pressure, and body fat percentage.

These findings reinforce the conclusion that the health-derived benefits from regular exercise do not require highly structured or vigorous exercise.

So, everyone: Get up and move! Do something! Move more, sit less!