You are what you write 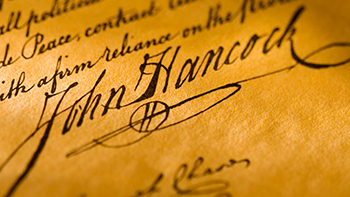 The world’s most famous signature.

My mother had an amateur’s interest in graphology — the pseudo-science of handwriting analysis — and there were several books on the subject in our house.  Omnivorous, I studied them, and with the logic of an 11-year-old came to the conclusion that genius and illegibility were somehow akin. Though I can’t claim the former of these attributes, the latter — illegibility — has been a hallmark of my writing ever since.

The thesis of graphology is that character can be revealed by, say, the size of a letter or the slant of the script; an emphatic downward stroke is revelatory, and a period or exclamation point tells us something consequential about the writer’s character. An optimistic nature might display an upward-rising trajectory to the letters on the page; a depressive would show the reverse. A backward-facing lean to the letters suggests a different kind of personality than a forward-facing one, and, no matter how we try to hide or even “forge” it, our script displays our mood.

There were illustrative plates: Examples of the hand of such eminent men as Beethoven, Einstein, Napoleon, and, of course, John Hancock. This last-named signatory (because of his pride of place in the Declaration of Independence) has come to be a synonym for the word “signature” itself. “Put your John Hancock here,” we say, inviting a stranger to sign. In my youth, I had a perhaps-precocious desire to be notable, and notability — it seemed to me — meant handwriting hard to decipher, like a physician’s scrawl. 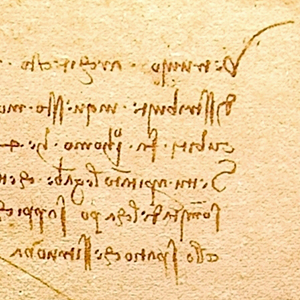 So I set about imitation. Leonardo da Vinci proved difficult to copy, since he was left-handed and used mirror-writing as a kind of code. Probably he wrote from right to left in his notebooks in order to avoid smudging the pages with ink. Reversing the procedure of a right-handed scribe, Leonardo let the ink dry on his thoughts while continuing to record them on the page. Beethoven, Einstein, and the rest wrote left to right and had in common (in part, no doubt, because these two wrote in German) obscure lettering to parse. So I took thisone’s strong downward slash, thatone’s upward-facing flourish in a capital letter, thisone’s angularity and thatone’s emphasis on separation between the dand e,and soon enough my script too became illegible. When I could no longer read what I wrote, I put down my pen and felt wise.

To start with, I’d been dutiful, practicing script on lined pages and following the Palmer Method, as we were taught in school. The Palmer Method was developed by Austin Palmer in the late 1880s and introduced by him in The Palmer Method of Business Writing(1894). The idea was to use the arm’s proximate muscles rather than those of the fingers to guide the pencil or pen, and the claim — unfounded, I suspect — was that a scribe could equal and even outpace the speed of a standard typewriter. It succeeded the more laborious Spencerian Method of Writing, which had been an accepted teaching tool for 50 years. It was in turn succeeded by the Zaner-Bloser Method, which taught schoolchildren to form manuscript letters rather than write in cursive. Now the D’Nealian Method — of teaching both cursive and manuscript (“print” and “block”) — handwriting has become the instructional vogue. We need not go into detail as to the distinctions here; some methods urged arm movements, wrist movements instead, or finger movements only, but each and all of them were in the service of uniformity, rapidity, and a clear, legible “hand.”

The organizing principle of cursive — sometimes called “script” or “longhand” — is that, by joining the letters and not lifting the pen, one can increase one’s speed. Formal cursive joins each letter; informal cursive permits pen-lifts and pauses between them. You have only to watch a child laboriously forming letters, then learning to do so more quickly, then writing without interruption to register the young scribe’s learning curve. My own progress had been rapid, but then I studied graphology and decided to be a genius. What had once been clarity became an unreadable scrawl. 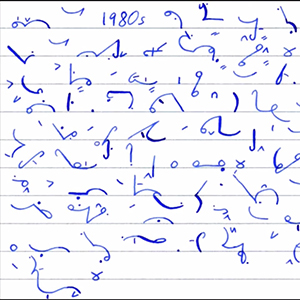 The history of written composition is a variable one. Punctuation was erratic; the distinction between capital and lower-case letters hard to parse. Spelling was variable, largely phonetic, and often the student would copy out language in a kind of shorthand — possibly to save time while transcribing what the teacher said, possibly to save on the expense of that rare thing, blank paper. In the earliest examples we have of written documents, there were no spaces between letters, and their placement varied too.

All this meant and means that writing — in the sense of marks on a receptive surface — is not a fixed procedure but subject to change. The electronic signature with which we ratify documents now would have been unimaginable only a few years ago; the methodology of future writing no doubt will further evolve. What’s constant or at least consistent in the history of writing, and why it continues to matter, is the hope and expectation that a thing once written will be preserved and read.

Some years ago, at her younger sister’s first birthday party, our 5-year-old granddaughter offered to make and put up a sign instructing the assembled guests how to dispose of their trash. It was a garden party — paper plates and cups, cupcakes and juice, and the paraphernalia of celebration: hats, balloons, and hot-dogs on the grill. There were two garbage cans. Penelope has an artistic nature; she lettered carefully, colorfully, then scotch-taped a sheet to the cans.  This is what she wrote:

Her school is a progressive one, and earnest in its desire to instruct its students how to salvage or at least preserve the planet. What she was writing down, for those readers who might require translation, was: “Keep the Earth Clean. Re-use. Reduce. Recycle.” When, however, my wife offered to help the 5-year old with spelling, she shook her curly head.