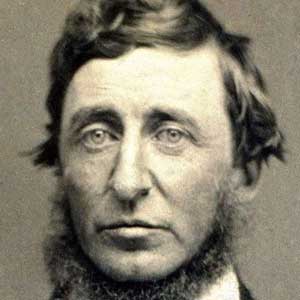 “Books must be read as deliberately and reservedly as they were written. It is not enough even to be able to speak the language of that nation by which they are written, for there is a memorable interval between the spoken and the written language, the language heard and the language read. The one is commonly transitory, a sound, a tongue, a dialect merely, almost brutish, and we learn it unconsciously, like the brutes, of our mothers. The other is the maturity and experience of that; if this is our mother tongue, this is our father tongue, a reserved and select expression, too significant to be heard by the ear, which we must be born again in order to speak.”

The distinction between “mother” and “father tongue” seems both inaccurate and invidious, but the general pronouncement makes good sense. Thoreau was a solitary, after all, and spent more time in silent utterance than speech. As he puts it, “However much we may admire the orator’s occasional bursts of eloquence, the noblest written words are commonly as far behind or above the fleeting spoken language as the firmament with its stars is behind the clouds.”

In our present moment, this distinction has increased. Few are so fluent as writers that a first draft can suffice as a finished thing; the methodology of composition has much to do with revision. Nearly no work of verbal art these days — these years and decades — is composed without close editorial reconsideration; spontaneity is less of a virtue in writing than in speech. 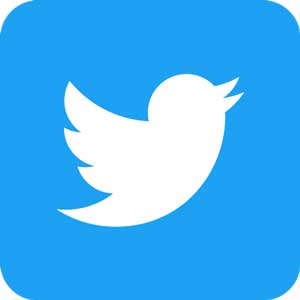 The “blog” may disprove this assertion, since one of its aims is to narrow the distance between the two modes and let the reader feel as though he/she is “listening in” to the thought process of the writer. Just look at how your neighbors — the boy in the stands at a baseball game, the girl on the opposite seat of a train — compose their prose in a rush. Those quick fingers on the keyboard of a smartphone don’t often pause in composition, nor does spelling matter much. There are emojis, contractions, the substitution of “u” for “you”; there’s “autocorrect” to serve as simultaneous interpreter of what’s tapped out at speed. A “tweet” is understood to be rapid and, as its name suggests, brief. It’s also true that copy editing has been devalued — even eliminated — by many major publications, as if the accuracy of syntax and spelling feels less important now. But by and large the distinction does hold; we pay repeated attention to what we write and less to what we say.

Most contemporary authors labor over language in a way one imagines their predecessors did not.
It’s worth remembering, further, that the history of writing and reading did not begin as a private or silent enterprise. In the Scriptorium of medieval monasteries —literally “the writing room” — more than one scribe would share the space, and if they did so in silence it would be because of governing tenets of behavior that endorsed such silence. But the production of such manuscripts was a communal procedure; the parchment and the inks and pens — as well as the task of copying —were shared. So too is the idea of “silent reading” a relatively modern one, and against the original grain. Perhaps because of the scarcity of books, as well as the relative paucity of those who were able to read them, the habit of reading began as an oral and aural affair. It still happens that a “designated reader” will sit at the head of a space — a room full of men cutting and rolling tobacco, for instance — and read to the assembly from that day’s newspaper or an agreed-on text. In those schools where textbooks must be shared, the lessons are spelled out aloud. And recitation in unison — think of the habit of call and response in houses of worship, or our classroom Pledge of Allegiance — is not uncommon today. In each act of silent reading, there’s a residue of sound. “Sound it out,” we tell the young reader, “and you’ll hear what you see.”

A labor of love 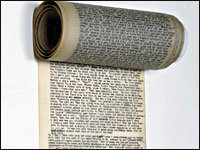 Legend has it that Jack Kerouac wrote ‘On the Road’ in three weeks, typing it almost nonstop on a 120-foot roll of paper. The truth is that the book actually had a much longer, bumpier journey from inspiration to publication, complete with multiple rewrites. (Image: Christie’s.)

The modernist “masters” — think of James Joyce or Jorge Luis Borges, those two near-blind exemplars of literary excellence — would not have dreamed of first-draft publication; it’s an axiom of all creative writing classes that a draft can be reworked. At most we call it “work-in-progress,” and the assumption is that progress consists of revision, a buffed-up-polishing of poetry and prose. Homer and Shakespeare, we suspect, did little of this; neither did George Eliot or Charlotte Bronté, but the contemporary author takes for granted that her or his expressiveness is something to monitor closely and, in the act of rewriting, improve.

It wasn’t always so. All who once laid claim to education were schooled in the trivium — the study of grammar, logic, and rhetoric. Its Latin root means, in effect, “the place where three roads meet,” and though it might stand lower as a course of study than the upper division of the liberal arts, the Medieval quadrivium —arithmetic, geometry, music, and astronomy— it was a necessary set of skills, requiring close study. And rhetoric, once mastered, would be pressed into service on a daily basis in the writing of letters, essays, tracts, diaries, and books. One gets the sense that authors of the 18th or 19th centuries did not need to disentangle their lines or struggle to make verb and noun conform. It’s less a matter of natural facility than acquired skill, but prolific authors of the past seem more or less wholly confident that a sentence, once begun, will reach its appropriate end.

We’ve lost that confidence now. Most contemporary authors labor over language in a way one imagines their predecessors did not. In their introduction to the First Folio of Shakespeare, in 1623, John Heminge and Henry Condell wrote admiringly of their dead colleague, “and what he thought he uttered with that easiness that we have scarce received from him a blot in his papers.” The playwright Ben Johnson, reading this, is reported to have said in envious exasperation, “Would he had blotted a thousand!”

To rest content with a first formulation is a gift given to few.