Super Bowl of the mind

Super Bowl weekend is upon us, and New England Patriots quarterback Tom Brady is going after the NFL’s most coveted trophy for the third consecutive year. The former Wolverines QB has won the Super Bowl five times already. The 2019 appearance is his team’s fourth in five years, and its ninth since 2002.

In other super exciting news, Michigan Today posts its 25th episode of “Listen in, Michigan.” Sure, it’s not the Super Bowl and I’ll never be married to a supermodel. But it’s all relative. As I continue to play around with a new skill in my little cinderblock office (overlooking the dumpster behind Cottage Inn, no less) I experience my own version of the Super Bowl each time I wrap a podcast. I’m not even kidding. I am an old bird over here, trying to teach myself a bunch of new tricks! 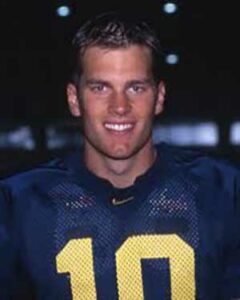 Tom Brady may be one of the world’s most extraordinary athletes, but I have pulled age-inappropriate all-nighters, primal-screamed at my Googler, and muddled my way through countless online tutorials just to stagger my way to episode 25. I wish the production quality was better overall, and I can literally hear my own learning taking place as I listen back. Let’s hope it’s not so obvious to others!

Now that we are emerging from the polar vortex, I hope you enjoy the episode and the entire issue.

We lead with business writer Greta Guest, who invites Michigan Ross professors to prognosticate about the coming year. While it’s hard to predict anything in this crazy world, these folks know their stuff, from climate change to Brexit.

In the “news of the weird” category, Jim Tobin relays the tale of an Elvis Presley gig at Crisler Arena in April ’77, just months before the King passed. One of his primary sources? Jack Harbaugh. Big Elvis fan.

Milwaukee-based freelancer Tom Kertscher talks to yet another alumnus I had no idea was “ours”: Anand Giridharadas, author, scholar, and political analyst. I’m sure the ideas in his new book Winners Take All: The Elite Charade of Changing the World will provoke some captivating conversation in the comments section.

There’s a couple of feel-good stories in the lineup about the University’s impact on the state of Michigan, and a nice writeup on a historic gift to Michigan Law students by grad Chris Jeffries and his wife, Lisa. It’s nice to see student support at the top of a donor’s list.

Oh, and we nearly forgot. You must read the story by my colleague Mandira Banerjee about Saudi Arabia’s first Rhodes Scholar. Majd Abdulghani is a geneticist at U-M’s Life Sciences Institute. This fall, she will join University of Oxford. Abdulghani is living her “science dream,” she told Mandira, and guess what? It all started with a podcast.