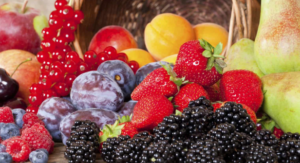 Some of the most compelling evidence supporting a diet rich in fruits and vegetables – endorsed by every significant health and science organization – revolves around studies showing those who eat more plant-based foods lower their risk of all-cause mortality.

Ever wonder why and how these foods exert such a strong health effect?

Well, different fruits and vegetables contain a group of compounds termed antioxidants, and it is these substances that are the responsible “protective” ingredients.

To understand antioxidants we need first to review a little basic biology. The figure here is a simple diagram of an atom, composed of a core containing protons and neutrons. Electrons revolve around the perimeter. 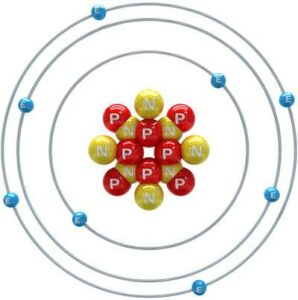 Electrons orbit the protons and neutrons at the core of an atom.

The blue balls are electrons, which carry a negative (-) charge, while the protons (red balls) in the core carry a positive (+) charge. When two or more atoms are linked together, they become molecules.

For a molecule to be stable, it must contain the necessary number of electrons. If the molecule loses an electron (when it isn’t supposed to), it may turn into a free radical. Most free radicals are unstable, electrically charged molecules in cells that can react with and damage other molecules, such as DNA. They also can cause chain reactions, in which the molecules they damage become free radicals. Free radicals form constantly during metabolism.

Free radical production brings its own side benefit. For example, the body’s immune cells use free radicals to kill invading bacteria; thus the body needs free radicals as well as antioxidants to keep them in check. 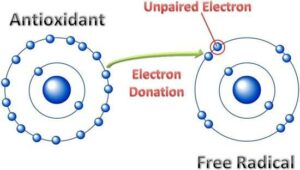 If a molecule loses an electron and turns into a free radical, the antioxidant molecule steps in and “gives” the free radical an electron, effectively neutralizing it, and preventing biologic harm.

When free radical production goes unchecked, it leads to a condition termed oxidative stress. During oxidative stress, critical molecules in the body can become severely damaged. For example, free radicals can trap a low-density lipoprotein (LDL) in an artery wall to begin forming plaque. Free radicals can damage DNA or they can change the course of what enters and leaves a cell. Any of these actions can trigger initiation of cancer and heart disease, and the development of Alzheimer’s disease, arthritis, cataracts, diabetes, kidney disease, and even age-related blindness.

Below is a list of known factors implicated in increased oxidative stress:

Antioxidants are essential for health

While humans can generate antioxidants, such as the cellular antioxidant glutathione (produced by the liver), the majority of antioxidants must be consumed. While some meat products and fish contain some antioxidants, depending on the types of plant food they consume, fruits and vegetables themselves constitute the major sources of dietary antioxidants.

The table below shows several types of antioxidants, their food sources, and potential benefits.

The following table explains how antioxidants work in the body, and offers sources for those antioxidants.

Clearly, the best way to get a variety of antioxidants in the diet is to eat plant-based foods that represent all the colors of the rainbow. Each color provides unique antioxidant effects. Bright orange and deep yellow fruits and vegetables like carrots, sweet potatoes, and apricots provide one type of antioxidant. Red foods like tomatoes, provide another. Green vegetables, such as broccoli and cabbage, and blue or purple foods, like blueberries and eggplant, each have antioxidant packages. Curcumin, the substance that makes turmeric yellow, is also believed to offer benefits.

Surprisingly, despite numerous studies, researchers have yet to demonstrate the substantial health benefits of supplemental antioxidants. Rather, it is the antioxidants in food that have been shown to exert the most significant influence. That is why experts from the American Heart Association, the American Cancer Society, and the American Institute for Cancer Research recommend getting antioxidants from food instead of supplements until research determines whether supplements are safe and provide the same benefits as antioxidants found naturally in food.

In 2010, researchers from Norway cataloged the total antioxidant content of more than 3,100 foods, beverages, spices, herbs, and supplements. The data show, conclusively, that plant-based foods introduce significantly more antioxidants into the diet than non-plant foods. The website retinafoundation.org provides a wonderful reference that details the amount of antioxidants in various foods.

In summary, the best assurance of consuming adequate amounts of protective antioxidants is to eat between five-nine servings of fruits and vegetables representing all the colors of the rainbow every day.