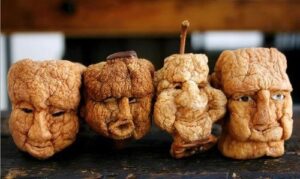 Who needs a Russian app to predict how you will age? Just grab an apple. (Image: Pinterest.)

Along with the increased wisdom and accomplishments that come with the passage of time, we experience aging in every nook and cranny of the body. Some changes are subtle, while others are easily witnessed. The face is the most visible example of physical changes that accompany aging. Even the slightest change in facial appearance is recognition of the inevitable aging-train that keeps rolling on.

Dozens of facial changes take place as the years add up. When we’re young, fat in the face evenly distributes with pockets that plump up the forehead, temples, cheeks, and areas around the eyes and mouth. With age, fat loses volume, clumps up, and shifts downward so facial features that once were round may sink and skin that was smooth and tight gets loose and sags. Gravity is a powerful force! At the same time, other parts of the face gain fat, particularly the lower half, so we tend to get baggy around the chin and jowly in the neck.

And, of course, there are wrinkles. Oh, those wrinkles, especially the deep ones in the forehead and between the eyebrows we politely call “expression” or “animation” lines. They’re the result of facial muscles continually tugging on and eventually creasing the skin. Other folds may get deeper as the underlying fat decreases and moves around. Finer wrinkles are due to sun damage, smoking, and natural degeneration of elements of the skin that keep it thick and supple.

Facial aging is due to changes in several types of tissue, including skin, fat, muscle, and bone. Changes in any one of these structural layers affect other layers, making it difficult to predict exactly how the face transforms with advancing age.

Skin — As skin ages, the middle layer (dermis) thins due to collagen loss. Collagen is the main structural protein in the extracellular space in connective tissues in the body. Elastin is the protein in connective tissue that allows many tissues to resume their shape after stretching or contracting. The skin’s ability to retain elasticity and moisture (from hyaluronic acid) decreases with age. With the loss of elastin and hyaluronic acid, the skin becomes drier, thinner, less elastic, and less supple. 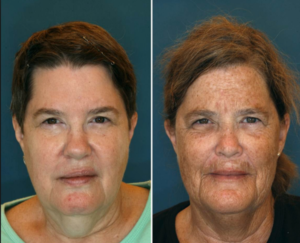 Identical twins; one smoked for 16 years longer than the other. Can you guess who the smoker is? (Source: Plastic and Reconstructive Surgery 2013;132(5).)

Smoking represents a major factor in making some individuals appear older than their actual age. In a 2013 study, scientists analyzed faces of a large series of monozygotic twins with different smoking histories. One twin was a chronic smoker while the other twin had never smoked, or within a twin set, both were smokers with at least a five-year difference in smoking duration. Professional photographers took standardized digital photographs of 79 sets of twins; 57 were women. The average age was 48.3 years (range, 18-78 years).

Results revealed the smoking twin had worse scores for upper eyelid skin redundancy, lower lid bags, upper-lip vertical lines, lower-lip vermillion wrinkles, nasolabial creases, and jowls. It is noteworthy that even among sets of twins where both were smokers, a difference in five years or more of smoking duration caused visibly identifiable changes in facial aging. 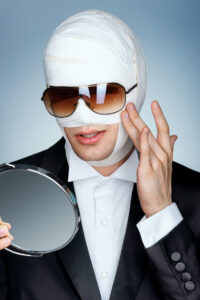 A humorous take on the aftermath of a facelift. (Image: iStock photo.)

An Internet search of the term “facial rejuvenation” returned some 40 million hits. Most were for websites that sell products like facial stimulators, lotions, injections, fillers, Botox, facelifts, and eyelid surgery. Moreover, these companies rely on vanity and fear of aging to promote “doctor-approved” solutions. Here are some of the more popular facial rejuvenation options.

Facelift. A plastic surgeon removes excess tissue and lifts sagging skin, usually in the lower part of the face. The average cost of facial reconstruction surgery, according to several Internet posts, averages about $12,000. Potential risks and side effects are rare but can include hematoma formation (blood collecting under the skin, causing swelling and pressure), scarring, hair loss near incisions, and facial numbness.

Sun protection. Protecting the face from the sun is the single best way of keeping a youthful face. Much of the sun’s damage comes from the UVA part of the light spectrum, so sunscreens that protect against both UVA and UVB light is optimal. Wearing a wide-brimmed hat is also a good idea.

Several prescription creams have been shown to reduce wrinkles and so-called liver spots caused by sun exposure. These FDA-approved creams contain retinoids, which are compounds related to vitamin A. They seem to work by inducing collagen production in the dermis and altering melanin, the pigment that causes dark spots. There are several varieties of retinoids -– tazarotene and tretinoin are the ones used in FDA-approved products. 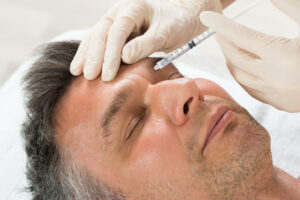 Dermal fillers. Dermal fillers are used to treat lines created by lost collagen and fat. After botulinum toxin injections, dermal filler injections are the most common cosmetic procedure performed in the U.S. Prime locations for the injections are two sets of parentheses: the pair of lines that extend down from the nose to the corners of the mouth, known as the nasolabial folds, and another pair that extends down from the corners of the mouth to the chin, known as marionette lines.

Many different materials are used as dermal fillers. Currently, the most popular one is hyaluronic acid, a complex sugar found naturally in many tissues. Hyaluronic acid is more expensive than collagen but lasts longer — up to six months in the nasolabial folds. Like botulinum toxin injections, the effect of the dermal filler shots wears off after several months — the duration depends on the injection site — but with repeat injections, filler can last months or longer. 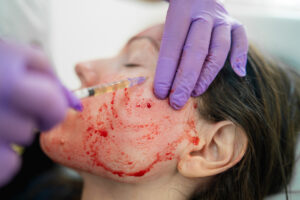 Laser treatments. Lasers can be used to home in on certain pigments: brown, if the goal is to get rid of freckles and liver spots, red if the target is broken capillaries. Lasers also are used for wholesale resurfacing of facial skin, as the uppermost layers of skin are stripped away, and with them, wrinkles from sun damage and scars from acne. The energy from some “nonablative” resurfacing lasers passes through the outer layer of the skin to work at a deeper level, in the dermis, to stimulate inflammation, which leads to collagen formation. The skin needs time to recover after most laser treatments – as much as a couple of weeks, depending on the type and extent of treatment.

Ultralift. This popular procedure for lifted cheekbones, jawline definition, and smoother, tighter skin uses ultrasound energy fired deep under the skin into the muscles that tighten the skin. The ultrasound stimulates the growth of new collagen over time, so it strengthens and tones the skin from within to make it look smoother and brighter on the outside. It’s also used for lifting the skin on the neck and under the chin. The procedure has to be redone about every three-to-six months.

Facial exercises. Use of exercises including strength, movement, or manipulation of facial muscles has been advocated for years. In Brazil, the use of orofacial exercises for aesthetic reasons is recognized officially as a subspecialty of speech-language pathology. Surprisingly, only nine studies were found with sufficient quality control, with a total of 43 subjects ranging in age from 31-87 years, that used facial exercises and measured different aspects of facial aging. The most common facial exercises are isometric and include:

Each exercise was done once or twice a day, and each position was held for 5-10 seconds.

Facial muscle exercise using the Pao device. (A) The mouthpiece of the device is held in the center of the mouth using the lips; (B) oscillatory movement of the device results from nodding the head up and down vigorously. (Source: Ui-jae, H., Aesthetic Surgery Journal 38(5):2018.)

One unique study involved the Pao device. Participants were instructed to form an “O” with their mouth and hold the mouthpiece of the device, located in its center, with their lips, making sure that force was evenly applied by the involved facial muscles. Nodding the head up and down vigorously causes the weighted ends of the Pao bar to swing. The weights at the end of the bar were 23g (0.8 oz). Participants performed the routine twice a day for 30 seconds for eight weeks. Results suggested that this type of facial exercise holds promise for demonstrating beneficial effects on general facial rejuvenation, particularly increasing facial muscle thickness and cross-sectional area.

Facial exercises have been promoted as an alternative to traditional medical procedures for facial rejuvenation. But it’s not possible to conclude the exercises are effective for this purpose, due to the paucity and quality of available evidence.