When was the last time you spent summer in Ann Arbor? It is likely that no matter the year, the setting was much the same: trucks, cranes, scaffolding, chain-link fences, and lots of folks in hard hats nabbing all the best parking spaces. 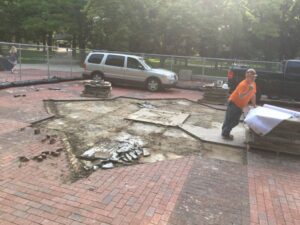 The Block M on the Diag is fenced off for a facelift. (Image: mlive.com.)

This year is no different. The Union remains cordoned off and boarded up until 2020; the LSA Building is laced in scaffolding while its “innovation hub” rises within; and the hothouse behind the Kraus Natural Sciences Building no longer exists as crews bring that hulk of an Albert Kahn structure into the 21st century. (And that’s just the stuff I walk by on a regular basis.)

The now-empty Ruthven Museums Building also will be getting a makeover, which is better news to deliver than reporting it’s gone.

Even the Block M on the Diag is getting “a little work” done. This would be the ideal time to take one’s first blue book exam since there is no chance of stepping on that sneaky talisman till crews are done. Who’s taking summer classes?

Brave is the soul who ventures to East U these days; it’s a veritable war zone of open trenches and miscellaneous rubble. I was devastated to hear my favorite Chinese restaurant, China Gate, was closing — and despondent to see it was already closed when I took my chances over there. I’ll never take an order of Kung Pao chicken for granted again.

New high-rises and such will soon take root along that once funky corridor, and before long, construction crews will move to yet another project.

Meanwhile, the Trotter Multicultural Center now stands tall, right across from Angell Hall on State Street — just as the Alumni Association Building prepares for its own transformation.

And in case you haven’t heard, U-M bought the Ann Arbor property that once belonged to Fingerle Lumber. Get ready for that summer, whenever it shall come.

The Greek philosopher Heraclitus is credited with the saying, “Change is the only constant in life.” He must have lived in a college town.