The Troubles, the Titanic, and ‘Game of Thrones’

Belfast in the winter 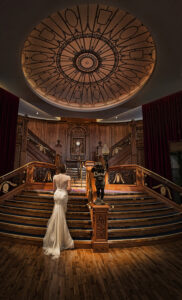 The Titanic was known for its grand interiors. (Image: Titanic Belfast.)

As the summer temperatures rise, I invite you to come along with me on a cinema-centric trip I made to Northern Ireland last winter.

The journey began with a visit to Titanic Belfast, a massive museum depicting Northern Ireland’s significant role in building European ships during the 19th century. Vintage photographic and film displays, many interactive, line the museum’s nine exhibition rooms. The visit culminates with the 1909-12 construction of the ill-fated luxury liner RMS Titanic at Belfast’s Harland and Wolff shipyard, site of the museum itself.

Architecturally precise living spaces recreate the passenger and on-board crew experience with lighting, furniture, and even toiletries meticulously represented. One can wander around the glassed-in rooms for fully dimensioned views. Photographs, films, and structural models detail the mechanical features of this supposedly unsinkable wonder. Video footage of the shipwreck, taken by deep-sea submersibles in 1985, is displayed on a huge screen near the end of the museum tour.

The scope of RMS Titanic’s grand realization and tragic demise on April 14-15, 1912, has captivated writers and filmmakers over the years. Walter Lord published A Night to Remember in1955; it evolved into a British film in 1958. But James Cameron’s epic romance Titanic (1997) remains one of the most-loved and highest-grossing screen spectacles of all time. If you visit Titanic Belfast and then revisit Cameron’s film, I predict you will gain new appreciation for the movie’s historically accurate and detailed production design. I did. 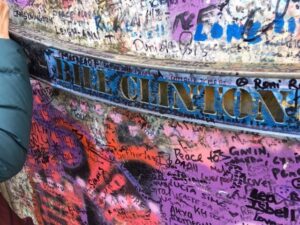 The author added his name to one of Northern Ireland’s Peace Walls. (Image: Frank Beaver.)

A subsequent cab ride through Belfast delivered an informal tour and history of “the Troubles,” the name for the late-20th-century conflicts stemming from religious, ethnic, and sectarian differences in Northern Ireland. The violence that erupted among civilian activists, police, and armed paramilitary groups resulted in some 3,600 deaths between 1968-98; casualties numbered some 50,000. Some of the most notorious “trouble” spots of West Belfast (Falls Road, Shankhill Road) now display massive colorful murals on buildings, walls, and park locations.

Our immersive history lesson concluded with a stop at one of the country’s Peace Walls, built to separate opposition groups. At 18 feet high, this particular wall (pictured here) spread down Springmartin Road — capped at the end with a police station. One side of the barrier was deemed Catholic and the other side Protestant. Thousands of visitors have signed the wall. I found an open spot that paid tribute to the Clinton administration’s involvement in helping restore peace to the country. The Northern Ireland government has committed to removing all of the Peace Walls by 2023. 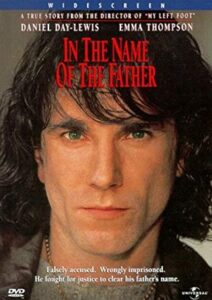 Daniel Day-Lewis played Gerry Conlon in this 1993 film about ‘The Troubles.’ (Universal Pictures.)

Director Jim Sheridan’s In the Name of the Father garnered numerous awards. Based on the autobiographical book Proved Innocent by Gerry Conlon, In the Name of the Father is a prison film, a courtroom procedural, and a poignant story of a father-son relationship. Critics hailed Daniel Day-Lewis for his intense “method” performance; the actor spent days in a prison cell before filming.

Yann Demange’s debut feature film, ’71, examines “Troubles”-era Northern Ireland through the eyes of a British teen, Gary Hook (Jack O’Connell). Hook, a newly arrived soldier in Belfast, is separated and abandoned by his unit during a chaotic riot in 1971. Isolated, imperiled, and wounded, Hook struggles for survival in an urban war zone that includes Catholic, Protestant, Republican, and Loyalist neighborhoods.

Actor O’Connell proved his skill for conveying tough but humane screen personae in the 2013 prison film Starred Up. In my May 2014 column, I described O’Connell as “an actor whose physical actions and emotional displays define his character more memorably than words ever could.” Describing his portrayal of British soldier Hook in Demange’s debut, New York Times critic Manohla Dargis saw similar qualities: “Mr. O’Connell runs away with ’71, in which his character’s every emotional, psychological hurdle makes for kinetic cinema.” Other critics describe the action-thriller as breathtaking. 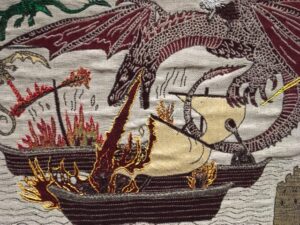 The Game Of Thrones tapestry at the Ulster Museum captures some of the fans’ favorite scenes. (Image: Frank Beaver.)

My Belfast experience included two other noteworthy cultural components. The annual Belfast Film Festival was in the middle of its 11-day run, and the city was alive with anticipation as the final season of HBO’s “Game of Thrones” approached. Crews have filmed in Northern Ireland since the show’s inception in 2010; its presence has been a boon for tourism and ancillary cultural events.

One such event was the display at the Ulster Museum of an embroidered tapestry depicting scenes from the television series’ first seven seasons. The version I saw, at 217 feet, predated the series’ much-anticipated finale; additional panels were to be added after the May 2019 conclusion, bringing the tapestry length to 252 feet. The tapestry takes its inspiration from the Bayeux embroidery that depicts the 11th-century Norman conquest of England, ending with the Battle of Hastings. It’s thought that mainly women stitched the Bayeux embroidery – as well as the GOT tapestry. Thirty female members of the Northern Ireland Patchwork and Embroidery Guilds worked with linen cloth panels to depict more than 100 scenes. The fantastical rendering of the fictional continents of Westeros and Essos are intricately displayed, from severe wintry conditions to fiery battle scenes. The human and mythical other-worldly creatures come to life in brilliantly colored, fantastic thread designs. I’ve provided this shot I took of an individual scene panel, and I suggest you scroll the tapestry online.

Do you have a favorite film with Irish roots? Tell us about it in the Comments section below.
Now in its 19th iteration, the Belfast Film Festival (April 11-19) has upped the cultural profile of Northern Ireland. In her introduction to the screening program, festival director Michele Devlin wrote: “Belfast isn’t the most glamorous city in the world, but with your help we could become one of the most movie-loving. We have always been devotees of film. The Troubles held us down, but then we bounced back. We can bounce higher still. The Belfast Film Festival is part of that.”

The festival’s program is for the most part traditional — an admixture of film selections from around the world. This year, 34 countries offered up 90 features and 80 short films. The four short-film programs showcased works from across Ireland, many by first-time directors. Prominent international directors and actors participated in the feature-film program and Q&A sessions: actor Robert Carlyle (Trainspotting, Angela’s Ashes); Director Lenny Abrahamson (Frank, Room); Catherine Bray (Netflix’s Beyond Clueless); Aamir Khan (Lagaan, Dangal). Festival director Devlin noted that Khan’s films and his presence signaled a “recharged focus on inclusivity.”

These ascendant aspirations were pointedly evident in the screening of Dive, a sociopolitical drama shown as part of the Belfast Festival’s Northern Ireland Independent Film category. This included a selection of entries made with micro budgets and financed in part by the filmmakers themselves. Dive was the longest of the N.I. independent films and the one with clear and present contemporary impact. The plot: Irish Republic teenager Tara (Vanessa Schaefer) is completing high school and training rigorously to make the Olympic swimming team. Her aspirations take an unexpected turn with the knowledge that she’s pregnant after a one-night hookup with a stranger. Dive’s timeframe is just before the Republic of Ireland’s mid-2018 landmark abortion referendum. Estimates note that in 2016 more than 3,000 Irish women traveled abroad for abortions, namely to Wales, England, and Amsterdam.

Tara seeks advice from a sympathetic but legally frustrated pregnancy adviser (played in Dive by real-life “Repeal” campaigner Tara Flynn). They discuss young Tara’s options and the expenses associated with travel and abortion procedures — unattainable costs for a high school student. Only with the unexpected assistance of an auto mechanic (Emmet Ryan), does Tara find the help she needs. Irish critics praised Dive for its timely and honest account of how legislation affects the rights of Irish women. It’s also a nuanced and wonderfully heartfelt screen drama. The repeal referendum passed by a 66 to 34-percent margin in the Republic of Ireland. Showing the film in Belfast in 2019 highlights the fact that Northern Ireland remains the only government of the U.K. that criminalizes abortion patients and providers. Its laws are among the most stringent.

I was able to meet and chat with Dive’s writer/director David F. Holmes. Holmes, a Chicagoan and film graduate of Columbia College, moved to Ireland in 2011 to study with the Feature Film School. Film producer Matthew Toman of Bankhouse Productions founded the school as a training center with film courses taught by recognized international professionals. Significantly, students receive credits at the Internet Movie Database (IMDB) for completed courses in writing, production, directing, acting, and for work on finished films such as Dive. Actors and crew members representing Dive appeared in force at the Belfast screening. As someone who had a long relationship with study-abroad programs, I was intrigued and impressed with the innovative concept of the Feature Film School.

The festival’s Devlin spoke correctly when she noted the event serves as a vital cultural experience for “our filmmakers and for our city in transition.”

I found the Belfast Festival to be exciting for all it has to offer locals as well as visitors. I look forward to returning to Northern Ireland and visiting more of its culturally and geographically diverse regions.