The year 2019 delivered yet another slate of billion-dollar-plus franchise films – Captain Marvel, Spider-Man, Far From Home, Alladin, Toy Story 4 — and the highest grosser of them all Avengers: Endgame ($22.5 billion). Squeezed among these blockbusters were a number of smaller, imaginative films that examine our cultural past.

Quentin Tarantino’s provocative Once Upon a Time … in Hollywood captures the low-grade menace of a culture in transition, and examines how the American film and TV industry of the late 1960s changed with it. Tarantino’s gift for cinematic sidelong glances at an earlier time and place is once again showcased in a film that is still being widely written and talked about.

But there are four other films — all British — that comment on the culture in curious and creative ways. I believe each is worthy of streaming if you missed them in theaters. One centers on classical ballet; the other three on popular musicians. 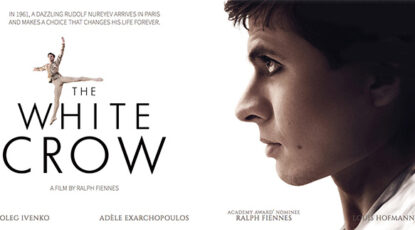 The White Crow chronicles the first 23 years in the life of Soviet ballet dancer and choreographer Rudolf Nureyev. In Russian terminology “white crow” symbolizes a one-of-a-kind, stand-out person. Nureyev was certainly that, an artist who created a presence for male dancers in a female-centric realm. David Hare (The Hours) adapted the screenplay from Julie Kavanagh’s thorough autobiography Rudolf Nureyev: The Life (2007).

Having visited rare archives inside Russia and interviewed little-known Nureyev dance acquaintances, Kavanagh spent 10 years producing the book. The subsequent film follows Nureyev from his birth in 1938 on a trans-Siberian train to his defection in Paris in 1961. The portrait painted is that of a temperamental, feisty, often rude youngster in the formative stages of training at the state-run ballet school in Leningrad. Ralph Fiennes directed The White Crow; he also portrays the piously dedicated Kirov ballet instructor Alexander Pushkin. Taken into Pushkin’s small apartment, Nureyev is coddled by his wife, Xenia, whose attention results in a sexual encounter with the lanky teenager. Aside from this experience and a fleeting one with a male school mate, the film is admirably restrained in its treatment of Nureyev’s personal life. 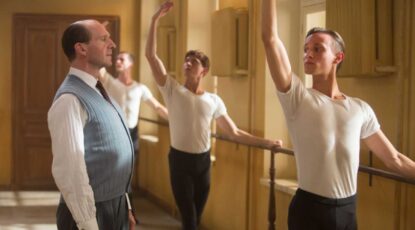 The dramatic focus remains on Nureyev’s emergence as a soon-to-be pop-star dancer whose stage physicality and artistic gifts for eye-popping leaps and bounds turn him into a Soviet Union treasure. Charismatic Ukrainian actor/dancer Oleg Ivenko is masterful as the on-screen Nureyev, perfect in his sensitive characterization and in the numerous re-staged performances at the Kirov Ballet Theater. Archival, black-and-white documentary clips taken from the wings are incorporated to show the real Nureyev in action. The dancer becomes a key figure in the Soviet Union’s Cold War quest for cultural and artistic prestige at the same time its scientists are preparing to launch an astronaut into space.

Drama in The White Crow intensifies when the Kirov dancers begin a European tour that ultimately will take them to Paris and London. By day in Paris, Nureyev visits the city’s museums and other cultural sites, while enjoying the pleasures of its nightlife. The troupe’s accompanying KGB minders take note and, wary of Nureyev’s possible intentions, inform him that he is to be put on a plane back to Russia. With the assistance of a wealthy Chilean friend, Nureyev is able to evade the state security officers and is offered asylum by French authorities. 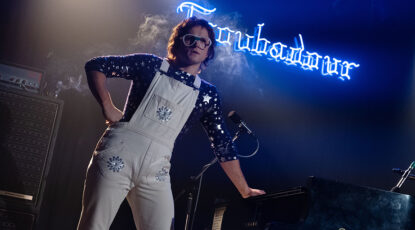 Rocketman, directed by Dexter Fletcher, is an honest-to-goodness musical biopic about the legendary entertainer Elton John. I had serious doubts about a film in which a very much alive, still performing artist would not be doing his own playbook songs. Too, I was not that familiar with Elton John’s larger body of musical work. That said, Rocketman proved to be a well-made, cleverly constructed cinematic experience.

Titled for Elton John’s 1972 song “Rocketman,” screenwriter Lee Hall (Billy Elliot) masterfully integrates the artist’s music into flashback episodes of his life, from a miserable childhood to an abused man whose raucous performances are fueled by alcohol and drugs. The film is launched with a scene in which Elton (Taron Egerton), dressed in a devil costume, makes a flamboyant entrance into a room where an addiction therapy session is underway. He sings the perennial concert favorite “The Bitch Is Back.” Welsh actor/singer Egerton is the force that gives Rocketman its power. Egerton possesses the requisite vocal skills to sing Elton John’s music, avoiding the lip-syncing that diminished, for many, Rami Malek’s performance as Freddie Mercury in last year’s Bohemian Rhapsody.

Also a significant presence is Billy Elliot’s Jamie Bell as Elton John’s songwriting partner and longtime friend Bernie Taupin. The downside of the biopic begins with the increasing physical and emotional abuse of the artist by manager/lover John Reid. The consequences are alcohol and drug addiction and an eventual suicide attempt. Closing subtitles note that Elton John has been sober for 28 years and is the married father of two children. Oscar screening voters and the audience at Cannes gave Egerton standing ovations. Not surprisingly, there’s talk of a sequel. 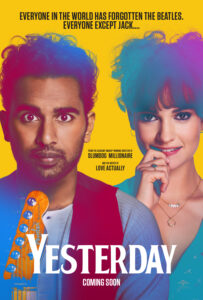 So what can you expect from a British film written by Richard Curtis (Love Actually) and directed by Danny Boyle (Slumdog Millionaire)? With that team of proven cinematic artists — maybe a romantic comedy with an international flavor? Yes, their recent film Yesterday is a concoction of young love mixed with the amazing emergence of a struggling singer/songwriter Jack Malik (Himesh Patel), supported by a small cadre of devoted fans and his manager, a besotted schoolteacher named Ellie (the beautiful Lily James).

Then, amidst an inexplicable global blackout, Jack has a motorbike accident after which he discovers the Beatles never existed. The film’s fantasy conceit comes with Jack’s uncanny recall of the Fab Four’s tunes and lyrics — beginning with a rendition of “Yesterday.” His friends are impressed, but not Jack’s parents who listen half-heartedly to some of his piano-accompanied Beatles music in their living room. Abetted by wannabe girlfriend Ellie and an American music producer (played by the remarkable Kate McKinnon), Jack becomes an instant international singing star. He jets off to a Moscow concert to open for Ed Sheerhan (playing himself) and on to screaming fans in a Los Angeles arena. Jack wows audiences, passing off the Beatles’ hits as his own.

Eventually, a pair of Beatles fans seek out Jack after a concert and, instead of exposing him as a fraud, they thank him for keeping the Beatles’ music alive.

I’d have to say that’s the point — pure and simple — of Yesterday. The audience at my screening seemed to mostly be in their 60s and were totally accepting of the contrived premise. The Guardian critic Peter Bradshaw described the film accurately as “full of exasperatingly enjoyable fantasy-comedy riffs.” The rom-com elements come into play as Jack and Ellie dance around their true feelings for each other. The climactic resolving scene, de rigueur, takes place in London’s Wembley Stadium and is followed by a final fantastical treat. Not surprisingly the Beatles’ company was pleased with Yesterday’s concept and happily accepted $10 million for the rights to the music.

Blinded by the Light 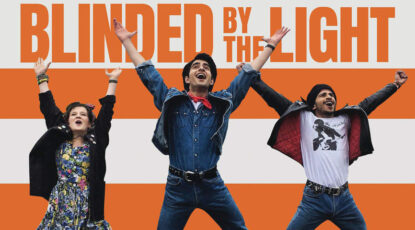 While each of the above films had much to offer in fictionalized cultural-based screen narratives, there’s one film just released that has yet to reach most local theaters — Gurinder Chadha’s Blinded by the Light. Chadha is the writer/director who created the delightful Bend it Like Beckham, an inspiring story of a British schoolgirl/soccer player of South East descent.

Chadha’s new film was developed from journalist Sarfraz Manzoor’s coming-of-age memoir Greetings From Bury Park: Race, Religion and Rock and Roll. The screenplay’s protagonist is young Javed (Viveik Kalra), a British Pakistani Muslim living in Thatcherite-era Luton in the late 1980s. Experiencing racial and parental strife, Javed calms himself by writing poetry. Then he discovers the music of Bruce Springsteen and finds hope and direction in the singer’s lyrics.

Springsteen allowed a dozen of his songs to be used in Blinded by the Light. As in Rocketman, each of the songs is connected to facets of young Javed’s coming-of-age struggles. One informs the other. Bedatri Datta Choudhury wrote, “While Springsteen takes the American dream and helps everyone navigate through its dismantling, Chadha makes it speak to an entirely different country and a whole new generation.” (Vague Visions, May 13, 2019.)

Blinded by the Light opened in limited theaters on August 16.