Hurricane Dorian and the Bahama Islands

In early September 2019, Hurricane Dorian stalled over the Northwestern Bahama Islands and scoured the Abaco Islands and Grand Bahama. During much of its stall, Dorian was a Category 5 hurricane on the Saffir-Simpson scale. This scale primarily measures one attribute of the hurricane, wind speed. Category 5 is the most intense, and winds were recorded at 185 mph.

A specific set of environmental conditions must come together to form and sustain a hurricane and a changing climate will influence hurricanes in many different ways.
Many issues emerged over the slow, multi-day progression of Dorian. Two of them captivated the headlines.

First, the forecasts of hurricane path were especially challenging to gauge because of the slowness and the stall. Think of riding a bicycle. We remain somewhat stable while in motion. However, when going very slowly or balancing at a stoplight (as skilled riders do), we tend to wobble and weave.

Second, President Trump’s statement that Dorian posed a risk to Alabama when that risk had already subsided, set off a social media and press storm of its own.

There’s a calm in your eye 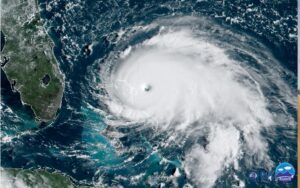 These days the behavior of most hurricanes fuels a discussion about climate change.

Hurricanes are pretty special. They are heat engines fueled by warm water and stacked straight up and down. From a satellite, you can see the surface of the ocean at the bottom of the hurricane’s eye. The well-known circular rotation is initiated in a relatively narrow latitude band in the tropics and subtropics. Hurricanes are uncommon very close to the equator.

A specific set of environmental conditions must come together to form and sustain a hurricane and a changing climate will influence hurricanes in many different ways.

What is most certain about our climate is that the planet is warming. This is a measure of increasing energy being available near the Earth’s surface. Since weather systems, such as hurricanes, are transporting energy to smooth out imbalances in the energy distribution, the presence of additional energy must influence hurricanes. Indeed, it would be miraculous if warming had no impacts.

But are the influences of climate change large enough to cause hurricane behavior that is outside the range of behaviors observed in the cooler climates of 30, 60, or 90 years ago? The answer is emerging as a certain “yes.” 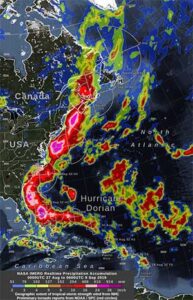 The amount of precipitation produced by Hurricane Dorian from Aug. 27 to Sept. 9. (Image courtesy NASA.)

The warming planet already has led to significant sea-level rise. Aside from wind damage, hurricanes cause storm-surge damage and  flooding damage from extreme rain. With sea-level rise, even if hurricanes remain unchanged from a century ago, the storm surge would cause more damage to humans, cities, and ecosystems. Increased storm surge is the
easiest impact to attribute to climate change.

Next, perhaps, is to consider one of the undoubted signals of climate change – warming temperatures. The sea surface temperature is warming, which means there is more energy to drive the hurricane’s heat engine. There is more evaporation from the ocean’s surface, and warmer air holds more moisture than cooler air. Hence, there is certainly more potential for catastrophic rain and flooding. Looking at hurricanes of the past few years — Dorian, Florence, Matthew, and Harvey, for example — we see a series of stunning, regional floods.

One might next consider whether hurricanes are more intense these days, or simply more numerous? This is not an easy question to answer. Since hurricanes are just one of the ways the atmosphere moves energy around, and as stated earlier, they rely on a set of environmental conditions, one would expect a variety of responses to the warming climate. For example, higher winds and more rain are measures of additional available energy. Likewise, the size of a hurricane is a measure of energy; sometimes a bigger hurricane has weaker winds. And one could hypothesize that the increasing heat from our warming planet could be redistributed by a larger number of smaller storms, including hurricanes. 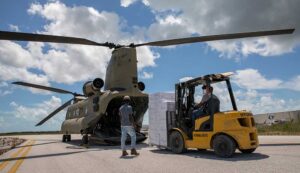 As with many aspects of climate change, it is not well-posed to expect a single outcome from global warming. Perhaps it is more realistic to expect that the variability will increase. Emerging evidence suggests one scenario to plan for are hurricanes characterized by intense wind and rain, while another planning scenario anticipates large, slow-moving storms with sustained precipitation (over land) and storm surge (at the coast).

There is one other aspect of Dorian to consider – the stall. Ongoing scientific discussion and research indicates that weather systems, including hurricanes, actually are moving more slowly. A conclusion is not yet easy to draw with regard to slowing and the physical processes that lead to it.

What can we say, at this early stage, about the Bahamas, hurricanes, and climate change? No doubt, sea-level rise and storm surge had an enormous impact on the low-lying islands. The ability to protect such vulnerable areas is limited. Building to withstand flood and wind is expensive. But it is time to start projecting adaptive strategies much farther into the future than we have done to date.

Many people have described the impacts of Dorian on the Bahamas, Maria on Puerto Rico, Matthew and Florence on the Carolinas, Harvey on Texas, and Katrina on New Orleans as “generational.” Climate change will make such generational events more frequent. We have yet to move from being reactionary to the hard problem of anticipation, including whether or not populations are viable where they presently reside.