The Joker is in the details

Back to the beginning 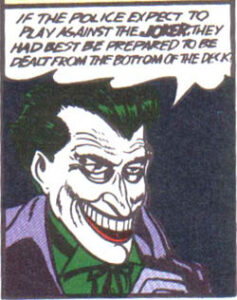 Since 1940 when DC Comics introduced us to Joker — aka “The Clown Prince of Darkness” — this uniquely original character has taken on various incarnations. The cel-rendered comic book versions — vivid, dark colors, sharp angular facial features — were followed by screen animations.

A quarter-century after the character’s origin, actor Cesar Romero embodied the live-action villain in the late 1960s’ series “Batman.” As the “human” Joker, Romero played the character with such outrageous camp that he wouldn’t allow the makeup artists to shave off his actual mustache.

Now you see him, now you don’t

In the early years after his creation, Joker appeared off and on in feature film “Batman” narratives, mostly in supporting roles. It would be Jack Nicholson’s expressively gleeful Joker in Tim Burton’s live-action Batman (Warner Bros., 1989) that filmgoers and critics saw new contours in the character’s origin story. Suddenly, Joker was a more devious, destructive villain who would go so far as to gas the citizens of Gotham en masse. The hugely popular film evolved into a cultural phenomenon as product marketing catapulted. 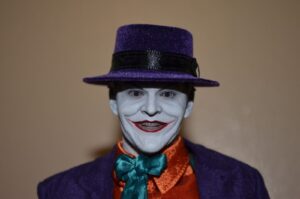 Nicholson’s iconic Joker met a serious challenge two decades later with Heath Ledger’s take on the character in Christopher Nolan’s The Dark Knight (Warner Bros., 2008). Ledger’s method-style acting produced a screen performance that startled and captivated filmgoers and critics. Ledger told The New York Times’ Sarah Lyall that he had imagined Joker as a “psychotic, mass-murdering, schizophrenic clown with zero empathy.” (Nov. 4, 2007). Although Ledger told colleagues and friends that playing Joker left him unable to sleep, he also said it was the most fun he’d ever had with a role. (Ledger died of an accidental drug overdose eight months before the film’s release. He received the Best Supporting Actor Oscar in 2008).

I won’t pretend to have all the facts about Joker in media portrayals over the past 80 years. Hardcore fans can probably recall that the character even appeared in Hannah-Barbera cartoons. I know him best from the films where he appears as a main character played by Nicholson, Ledger, Jared Leto (Suicide Squad, 2016), and Mark Hammill, as Joker’s voice in the early 1990s’ animated “Batman” TV series. 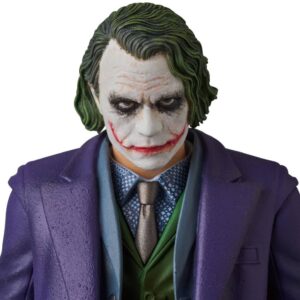 In director Todd Phillips’ 2019 creation, Joker emerges as a compelling, mesmerizing character. Joker is billed as an “origin story.” But no origin narrative came with the character’s 1940 debut. Bruce Wayne’s transformation into Batman had been laid out in plot details that began with DC Comics’ 1939 edition “All-Star Batman and Robin.” Phillips’ interest in bringing Joker back to the screen (he co-wrote the script with Scott Silver) came from the desire to create an entirely original story that would be open to new interpretations. During post-production Phillips said, “That’s what was interesting to me. We’re not even doing Joker but the story of becoming Joker.” (Digital Spy, July 8, 2019).

Phillips and Silver did pick and choose elements from Joker’s long multimedia history, but turned to less intrinsic DC Comic sources for further inspiration. Universal Studios’ 1928 German-expressionist film The Man Who Laughs was a logical source. Paul Leni’s film told the story of the 17th-century Englishman, Gwynplaine. Orphaned as a child, Gwynplaine is captured by a roaming gang who carve the boy’s face into a permanent smile. A traveling vaudeville showman takes him in, along with an abandoned blind girl. As adults, the impaired couple star in a sideshow feature and fall in love. Gwynplaine — bullied and humiliated as a child — shields his disfigured face except for sideshow audiences. The great German actor Conrad Veidt played the role; he would go on to play Major Strasser in Casablanca (Warner Bros., 1942). Adapted from Victor Hugo’s 1869 drama L’Homme Qui Rit, the story shared many of the same emotional, psychological conflicts of need and loneliness found in Hugo’s Phantom of the Opera. 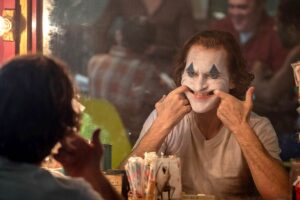 The central figure in the Phillips/Silver film Joker is Arthur Fleck, a mentally disturbed young man who works as a street clown and party entertainer. He suffers from a sporadic, spontaneous, and pathological laugh, and is forced to explain his condition by giving a descriptive wallet card to startled observers. (Avoiding spoilers, Fleck’s Joker originates from a darkly chaotic and violent tale born of humiliation, rejection, and betrayal.)

Joaquin Phoenix as Fleck, simply put, owns Joker. I’m compelled to ask: If Daniel Day-Lewis stays true to his word that Phantom Thread (Focus/Universal, 2017) was his last film, can a case not be made that Phoenix is the most interesting and compelling screen actor we now have? Like Day-Lewis, with a reputation for tackling a role using “the method,” Phoenix is known to prepare in a similar way when creating screen characters: Commodus in Gladiator (Dreamworks, 2000) and Johnny Cash in Walk the Line (Twentieth Century Fox, 2005) are just two examples.

In Spike Jonze’s sci-fi rom-com Her (Warner Bros., 2013), Phoenix portrays Theodore Twombly, a man who falls in love with an AI virtual assistant. In one scene he conveys a purely verbal romantic/sexual encounter. Time critic Richard Corliss wrote, “Phoenix must communicate his movie’s meaning virtually on his own. That he does with subtle grace and depth. Phoenix shows us what it is like when a mourning heart comes alive.” (Oct.12, 2013). One could say a “mourning heart” is driving Arthur Fleck’s inner turmoil, caused most notably by his stultified desire to achieve success as a stand-up comedian.

And therein resides another source of inspiration for the Phillips/Silver screenplay. In Martin Scorsese’s The King of Comedy (Twentieth Century Fox, 1983), Robert DeNiro plays wannabe comedian, Rupert Pupkin. The disturbed Pupkin stalks a late-night talk show host (Jerry Lewis) in an effort to get on TV. Pupkin’s mantra – “All horror is hilarious!” – sets the tone of his routine, filled with tales of childhood abuse. In a clever narrative reversal, DeNiro plays the talk show host sought by Phoenix’s Fleck in Joker. 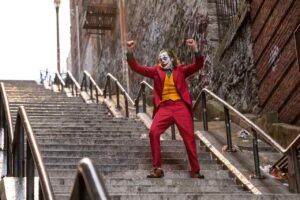 “Origins” aside, I was most impressed and mesmerized by Joker’s creative use of expressive details. Physically, Phoenix is a fraction of his previous on-screen self, having dropped more than 50 pounds before filming. His shriveled, needy body becomes as startlingly pointed as his pained facial expressions.

Some of the most compelling interludes in Joker occur when Phoenix breaks into lyric dance movements that convey a dreamlike release from his chaotic life. Heights and stairs appear as recurring motifs, familiar symbols of intrigue and danger in German expressionism and Alfred Hitchcock mysteries. Fleck has to climb a five-tiered set of uninviting metal stairs just to reach Gotham City, a ghostly rectangle of daylight at the street-level exit. The stairway’s middle tier serves as a perfect performance stage for Fleck’s mood-altering dance transitions.

For me, Joker was a fascinating cinematic exercise and one with the many possible interpretations writer/director Phillips imagined in his screenplay. Filmgoers and critics have proffered timely messages found in the dialogue and action: the ire of disenfranchised citizens, angry street protests, “masks” as metaphorical identity shields, disregard for the mentally impaired. Reviews are mixed, but I found Joker to be an entertaining fantasy. Yes, it was shocking sometimes, but no more so than many feature horror films and war movies that come our way these days.