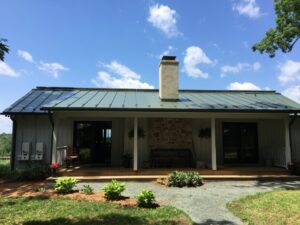 Although there’s no place like home for the holidays, my family occasionally picks an interesting gathering place to celebrate. Once, it was our cottage in northern Michigan near the ski slopes and cross-country trails. Two years ago it was London; our daughter, Julie, lives there.

In 2019, the unanimous choice was Charlottesville, Va., where our daughter, Johanna, lives. The Beaver cousins of North Carolina and Virginia who don’t often see one another planned a pre-Christmas luncheon, sharing reminiscences about their grandparents Louise and John Beaver.

We also took in the local culture. We toured Thomas Jefferson’s home, Monticello, and enjoyed the Christmas releases Little Women, Star Wars: The Rise of Skywalker, and Knives Out (we took up a full row of seats at the Regal Stonefield Movie complex for the Agatha Christie-style “popcorn movie.”) The Sunday before Christmas we attended the Richmond Ballet’s performance of “The Nutcracker.” Daughter Johanna was in the orchestra pit playing viola with the Richmond Symphony Orchestra. Nephew Byron Chafin’s 7-year-old daughter, Charlotte, performed as one of the lambs in the Marzipan Dance sequence. 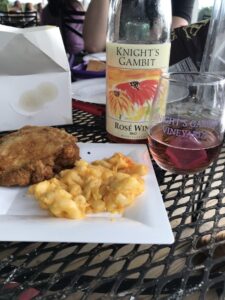 The vineyard Knight’s Gambit takes its inspiration from a Faulkner title.

On New Year’s Eve, we packed up and decamped to a 120-year-old cabin in Albermarle County, a 30-minute drive out from Charlottesville. Here we enjoyed the rolling hills of  Virginia’s Blue Mountain wine country. We sat in caned rockers on the front porch of our rented farmhouse until Paul, the owner of the Knight’s Gambit winery, came to greet us. A distinguished and dapper man, Paul told us his daughter, Jordan, would be our hostess for our New Year’s Eve wine tasting.

The tasting room was lovely, complete with game tables and a wood-burning fireplace. The hospitable family dog Schnoodle made sure we felt welcome as we tasted six wines from the label, which debuted in 2003. Jordan explained the name came from her great grandmother’s favorite short story written by her great grandfather. When asked if her great grandfather had written a lot of stories she answered demurely: “Yes.” When asked his name she replied, “William Faulkner.” 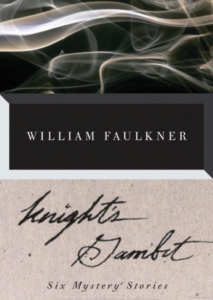 Faulkner had one surviving child, a daughter named Jill, born in 1933 in Oxford, Miss. Jill married Paul Summers and was mother to the Paul Summers who greeted us on our arrival. Faulkner’s Knight’s Gambit is a collection of six short stories set in the writer’s fictional Yoknapatawapha County, featuring Jefferson City, Miss., attorney Gavin Stevens. The New York Times described Stevens in Knight’s Gambit as a wise and forbearing student of crime whose “sharp insights and ingenious detection uncover the underlying motives” in each of the collection’s stories. Knight’s Gambit (with an ongoing chess game between Gavin and a nephew) was adapted in 1955 as the first episode in the CBS television series “Climax!” The Stevens character also appeared in Faulkner’s novel Intruder in the Dust, published in 1948 and praised for its thematic notions of Southern racism. Made into a 1949 film, the adaptation closely followed the novel by recounting the exoneration of Lucas Beauchamp (Juano Hernandez), a wealthy black man falsely accused of killing a white man in Jefferson City. David Brian portrayed Stevens.

Faulkner’s screenplay writing and co-writing credits include John Ford’s Submarine Patrol (1938), and Howard Hawks’ To Have and Have Not (1944), and The Big Sleep (1946), among others.

Though Faulkner was not involved in the screen adaptation of Intruder in the Dust, he enjoyed an extensive Hollywood career. He began as a screenwriter at MGM in 1932 and, over two decades, contributed to dozens of film scripts. Director Howard Hawks’ brother William was Faulkner’s agent. The writer’s notable film credits include Today We Live (1933), The Road to Glory (1936), John Ford’s Submarine Patrol (1938), To Have and Have Not (1944), The Big Sleep (1946), and his last screenplay, The Age of the Pharoahs (1955). For the most part, Faulkner’s scriptwriting forays to the west coast were made with the intention of supplementing family income while he sought to launch his “other” writing career. Faulkner admitted in an interview that he wasn’t much of a moviegoer, but said that he had seen Intruder in the Dust, and greatly admired Puerto Rican actor Juano Hernandez’ performance as the innocent black man. 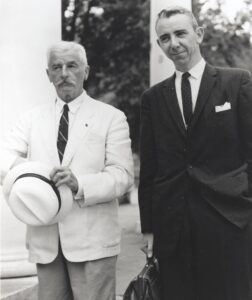 Faulkner with Blotner at UVA prior to Blotner’s arrival at U-M in 1972. (Image: UVA.)

In 1972, a professor named Joseph Blotner moved from the University of Virginia (UVA) to Ann Arbor to take up an English professorship here. At Virginia, Blotner had become close friends with the writer during Faulkner’s tenure as UVA’s first Emily Clark Balch Writer-In-Residence. Faulkner conducted classes and seminars about his views on literature’s roles in society, filtered through his own writings. Throughout 1957 and 1958 he is estimated to have conducted more than three dozen lectures and public events about his books, having by then received the 1949 Nobel Prize for Literature, as well as a Pulitzer and two National Book Awards.

Blotner and fellow English Professor Frederick Gwynn operated reel-to-reel tape recorders at each event, preserving 1,700 minutes (some 60 hours!) of the esteemed writer’s lectures and commentaries. A digitized version of the Blotner-Gwynn recordings is available in UVA’s William Faulkner Collection. Faulkner also left papers, letters, documents, original manuscripts, and Hollywood screenplays and synopses to the archive. His family agreed that Blotner should become Faulkner’s official biographer and gave him total access to the collection. According to his New York Times obituary (Nov. 23, 2012), Blotner spent 10 years writing the 2,175-page biography (which weighs 8.5 pounds). He published the book in 1974, two years after joining the Michigan faculty. 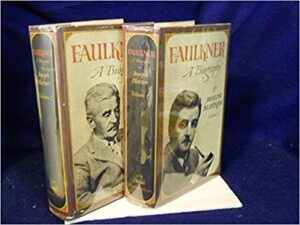 This surprise connection with members Faulkner’s family touched off my own recollections of his work. As a sophomore in college, I had read “The Bear” in a short story class — a beautiful, concise piece about a Southern boy’s four-year pursuit of Old Ben, an aging bear. It’s an unforgettable work rich in poetic and introspective styling.

As a doctoral film student at Michigan in the late 1960s, I enrolled in Professor John Aldridge’s English course on modern fiction. I researched a thesis paper for his class — “The Cinematic Analogy in Contemporary Literary Criticism.” The essay examined the ways in which critics and theorists often used cinematic terminology to review prose. 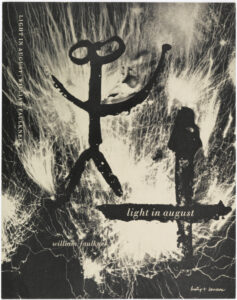 Madame Bovary, for example, expressed satire by featuring rapid cross-cutting between action and dialogue. Proust’s Remembrance of Things Past (aka In Search of Time Lost) used the appropriation of disparate, involuntary moments — time lost and reclaimed — as the essence of characterization. In fact, reading Faulkner’s Light in August in that class inspired my own thesis. I wrote about the extensive use of flashbacks and shifting narrative plot-lines, as local townspeople and “outsiders” mingle in the rural south. Faulkner uses the techniques to explore race, sex, religion, and social class. Of the complex world created in Light in August, a pointed passage reads: “People everywhere are about the same . . . but it did seem that in a small town, where evil is harder to accomplish, where opportunities of privacy are scarcer, that people can invent more of it in other people’s names.”

Time and motion emerge as key elements in the novel. For Faulkner, time is fluid and action often is abbreviated (the opening scene with Lena), sound elements contribute to a slow-motion effect, and time is encapsulated in montages and snippets. A house seen burning in the distance is a recurring image throughout the novel, delivered in words but not unlike a cinematographer’s camera capturing a continuous arc shot around an event. These expressive concepts on the page often apply just as well on the screen — films as diverse as Last Year at Marienbad (1961) and Tree of Life (2011) come to mind.

While teaching my course Theory of Film, I read and discussed Light in August with my students as an example of cross-media artistic expression.

Faulkner discussed his use of time and motion in a Spring 1956 issue of The Paris Review. “Time is a fluid condition which has no existence except in the momentary avatars of individual people,” he said. “There is no such thing as ‘was’ — only ‘is’ . . . The aim of every artist is to arrest motion, which is life, by artificial means and hold it fixed so that a hundred years later, when a stranger looks at it, it moves again.”