The accidental cartoonist grows up 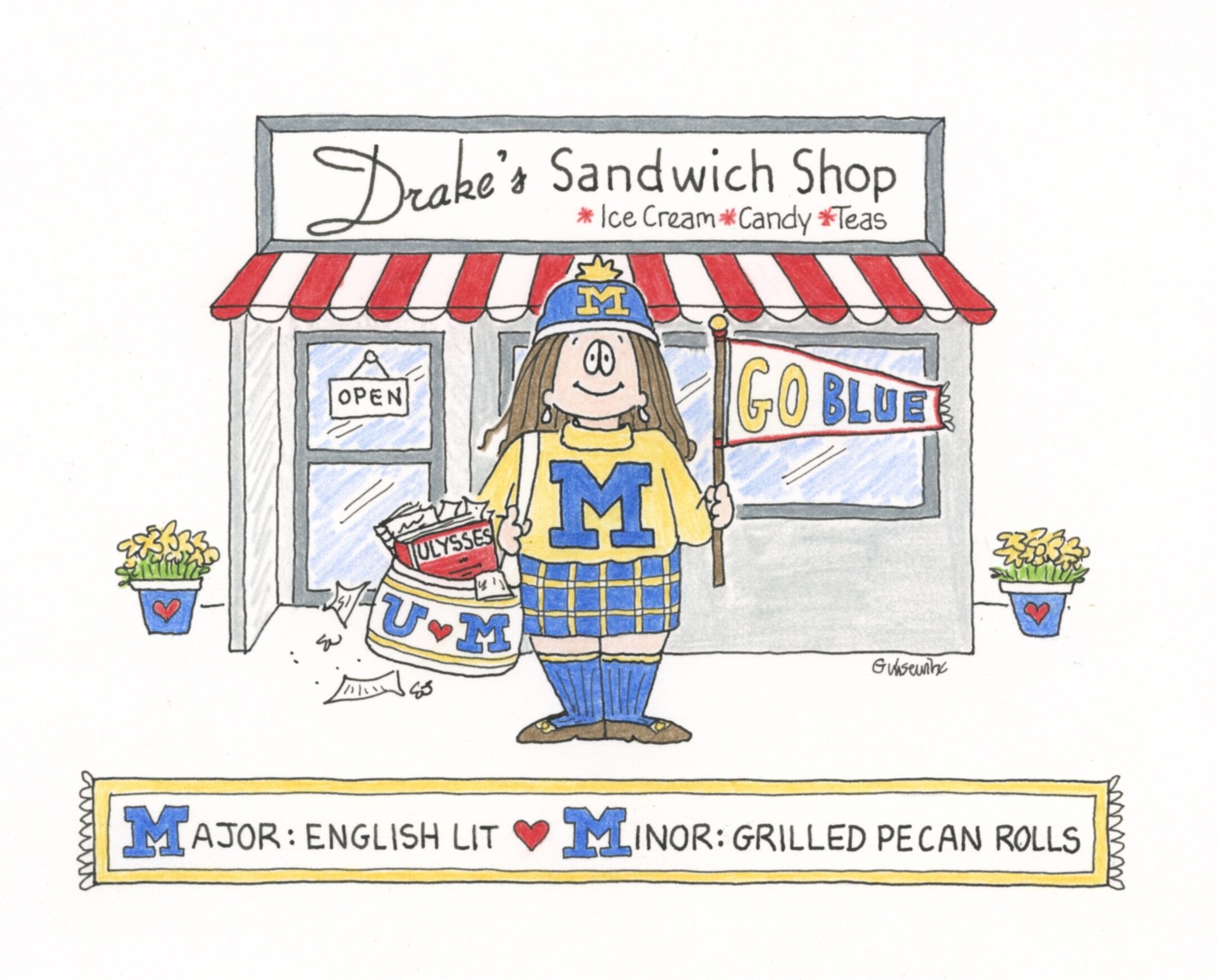 “I couldn’t draw at all” 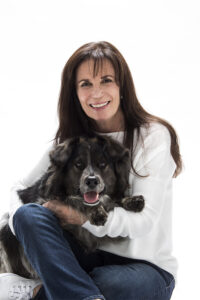 On the first day the award-winning comic strip Cathy ran in 66 newspapers nationwide, its 26-year-old creator hid in the ladies’ room at a Detroit-area ad agency.

“I was so embarrassed somebody would see the strip and that the artists at the agency would ridicule my artwork,” confesses Cathy Guisewite, BA ’72, who was then a vice president at W.B. Doner & Co. “I couldn’t draw at all!”

The year was 1976, and the Age of Feminism was in full swing. Young women in their 20s were torn between pursuing careers and mothballing marriage — or tying the knot, raising kids, and forever relinquishing the keys to the C-suite.

“I had worked so hard to present myself as a serious, professional, working woman,” Guisewite says. “Then out comes this comic strip where the main character, Cathy, is sobbing over some guy. I couldn’t pretend it was somebody else. It was horrible!”

At the time, Guisewite thought she would stay in the advertising business forever. Becoming a cartoonist was never in the cards.

But when the comic strip’s popularity grew to a tipping point, she ended up quitting her job at Doner, moving to California, and producing Cathy for 34 years. At its peak, Cathy appeared in almost 1,400 papers. She finally pulled the plug in October 2010.

“For the young woman today . . . having it all means having a child and a big career ― plus being a devoted parent, a school board member, an investment expert, an environmental activist, a global change-maker, a romantic partner, a weekend yoga instructor, an online entrepreneur, and a size 6.”

Guisewite is the first to admit she flunked retirement. So, now she’s out with a new book, Fifty Things that Aren’t My Fault: Essays from the Grown-up Years (Penguin Random House, 2019)

With her lighthearted anecdotal approach, Guisewite finds wry humor in the quirks and quandaries that she, at age 69, and other Baby Boomers now confront. Many are squeezed between caring for rebellious offspring and set-in-their-ways parents while dealing with the annoying “H-es” of aging ― hip replacements, hypertension, hernias, hair loss, and hearing aids.

“Many women who grew up reading my comic strip about the tortuous dating, dieting, and dreaming years are in the same spot I am right now, trying to navigate this icky new phase,” Guisewite says. “I wrote my book because I needed to get it out of me and onto paper. I also wanted to reconnect with readers who are going through these difficult transitions. I hoped my book would feel like a friend to women, just as my comic strip had.” 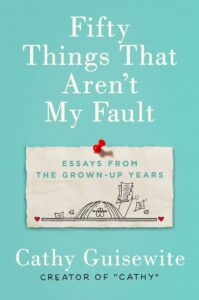 Guisewhite’s long list of titles also includes What Do You Mean, I Still Don’t Have Equal Rights??!! and May I Borrow Your Husband and Baby? (Penguin Random House, 2019.)

After a sheltered childhood in Midland, Mich., Guisewite yearned to attend a college where her world could be expanded. So she packed her neatly ironed blouses, short skirts, and knee sox in her suitcase and headed to Ann Arbor.

“At Michigan, I was introduced to different cultures, races, and ideas,” recalls Guisewite, who soon ditched her short skirts for baggy, ratty jeans, much to her parents’ dismay. “The campus was so big and diverse. Starting classes in 1968 when the world was going through turmoil and change was eye-opening for me.” She says that bigger world vision helped her become a more compassionate, open-minded listener who made an effort to tune into the people, places, and things around her.

As a coed, Guisewite describes herself as being shy and pretty solitary. She never walked in a protest march on the Diag or chugged a beer at the P-Bell.

Guisewite majored in English literature, but took only one creative-writing class. She considered it too easy and too much fun for a serious-minded student. The idea never occurred to her to sign up for courses she was interested in.

“Jeans were the uniform of awakening. They helped free the voices of some of us who had no idea we had anything to say.”
“I thought college was supposed to be hard, so I took classes such as anthropology and economics where I was doomed to failure,” she explains. However, her creative-writing professor saw great potential and creativity in her work and encouraged her to continue writing: “That stamp of approval has stayed with me for my whole life.”

Ironically, two “bizarre flukes” ― an advertising workshop that led to two job offers and an elective course in lettering at the-now Stamps School of Art & Design ― ushered her into the advertising business and later played out in her comic strip.

“There’s nothing I’m more proud of than graduating from the University of Michigan,” Guisewite says. “I loved the school and the experience.”

After graduation in 1972, Guisewite quickly climbed the ladder of career success while her love life languished in the dumps. She was overweight, unloved, and miserable.

“I couldn’t stand it when someone I decided I loved didn’t love me back, even though that was the whole attraction in the first place. I couldn’t resist the challenge of trying to get the wrong person to change his mind.”
“I had two powerful role models, both named Betty ― the Betty Crocker of my youth and the Betty Friedan of my future,” Guisewite laments. “I was caught in the middle between the traditionalists and the Women’s Libbers. I continued to gain weight eating one Betty’s chocolate fudge cake while I tried to digest the other Betty’s feminist ideas.”

Guisewite consoled herself by writing in her diary while waiting for Mister Right to call. He never did.

Growing up, she had inherited her father’s sense of humor and his ability to see the funny side of life, even when things looked bleak. It helped her cope.

“One night I drew a picture of how pathetic I looked,” Guisewite says. “It made me feel so much better to see a little drawing summing up my misery. So I started doing that a lot, capturing the worst of my day, my most pathetic moments, in little scribble pictures.”

Guisewite often sent the drawings home to her parents. Her mother thought the scribbles had the makings of a comic strip and went to the library to do some research. She sent her daughter a list of possible comic-strip syndicates and an ultimatum: You submit your drawings or I will. 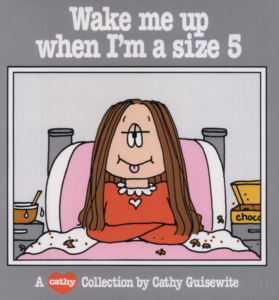 “I had no intention of doing a comic strip, but just to get my mom off my back, I sent a package of my drawings to the name at the top of the list,” Guisewite says.

That name was Universal Press Syndicate, and they signed her up immediately. The strip debuted on Nov. 22, 1976.

“Once I started the strip, I had a deadline 365 days a year,” she says. “My only goal was to get through the day with a sense of humor.”

In 1992, Guisewite adopted her daughter, Ivy, and five years later, she married screenwriter Christopher Wilkinson, who has a son, Cooper. (They separated in 2008.) Her parents, Bill and Anne, left Midland and retired in Florida.

The trials and tribulations of being sandwiched between two generations created a wellspring of material for Guisewite’s comic strip. The imaginary Cathy, who struggled through the “four basic guilt groups” of life ― food, love, mom, and work ― soon gained a loyal following of adoring readers.

By the mid-1990s, the strip appeared in nearly 1,400 newspapers. Guisewite received an Emmy Award for Outstanding Animated Program for the TV special “Cathy” in 1987 and the Reuben Award for Outstanding Cartoonist of the Year in 1992. She was a frequent guest on “The Tonight Show” with Johnny Carson. In 1994, her alma mater asked her to deliver the spring commencement address at the Big House. It poured rain, as it turned out.

Back to the drawing board

Were Cathy Guisewite to go back to the drawing board and recreate her daily strip in 2020, the comic would be far different. For one thing, the concept of “having it all” has changed over the years.

“Everything’s more complicated for my daughter’s generation. I worry that the bright, blazing possibilities of my generation don’t seem possible at all to a lot of young women today.”
“When I was writing the strip, ‘having it all’ meant having a job and a baby,” she says. “For the young woman today, the pressure to do and be everything is overwhelming. Having it all means having a child and a big career ― plus being a devoted parent, a school board member, an investment expert, an environmental activist, a global change-maker, a romantic partner, a weekend yoga instructor, an online entrepreneur, and a size 6.”

Differences in the way the Facebook, YouTube, and Instagram generation communicates, meets and dates, as well as their expectations for intimacy, have thrown another monkey wrench into already-complicated human relationships.

The bra-burners of Guisewite’s generation have given way to the Victoria’s Secret lingerie and head-to-toe Spanx wearers of her daughter’s generation. Magazine cover stories embrace women of all shapes and sizes while the advertisements and articles inside still celebrate svelte models and dispense advice for removing unwanted inches from one’s thighs. 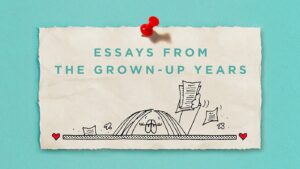 The book of essays joins Guisewite’s other titles on the shelf, which include some 60 compilations of her comic strips. (Penguin Random House, 2019.)

“In their hearts and souls, a lot of women still don’t feel great about themselves all the time, but there’s less opportunity to express their feelings,” Guisewite says.

That’s why humor, in her mind, remains an important emotional equalizer that bonds people, especially women, together. The ability to have a sense of humor about the little things is what gives everyone the strength to take on the big things, she insists.

“I loved doing the comic strip, but there was only so much I could say in those four little boxes,” Guisewite says. “It was a dream come true to get to write in essay form in my new book. To have the time and space to talk more thoughtfully about what so many of us have gone through, and are going through now. To help us all step back, look at our lives, and celebrate the many, many things that aren’t our fault!”

(The generous and gifted Cathy Guisewite created the original artwork of her co-ed self in front of Drake’s exclusively for Michigan Today. Thank you, Cathy. Go Blue!)