The zig-zag line of progress 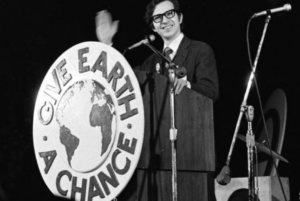 Doug Scott was a co-chair of ENACT, the organization that presented the Environmental Teach-In of March 1970. (Image: Bentley Historical Library.)

One of the most aggravating aspects of human development is its inability to stay a straight course. We operate under the misguided perception that we are making forward progress or catching some kind of upward trajectory as we seek to improve society and better our circumstances. Yet we seem to be spinning in circles.

Ironically, we excel at recycling our issues, if nothing else.

As we approach the 50th anniversary of U-M’s Teach-In for the Environment, we find the planet is in terrible shape. For 50 years, U-M students have taken a proactive stance to protect the environment. They’ve staged teach-ins. They’ve presented at Regents’ meetings. They’ve demanded divestment from fossil fuels. And guess what? They’re still doing it in 2020.

Back in the University’s earliest incarnation, President Tappan was concerned that co-mingling male and female students would topple society and he did his best to keep women out. But in 1870, Madelon Stockwell broke the stalemate and we all survived. Progress? Well, yes. But not exactly forward motion. A scan of 2020 headlines illustrates that pesky “women problem” continues to persist.

Then there’s civil rights and social justice. The Black Action Movement that arose in the ’70s has morphed into the hashtag #BBUM, or Being Black at Michigan, for the 2000s. No matter the year, many students of color face discrimination and feel marginalized at Michigan and elsewhere.

When you think about it, the modern-day activist could simply repurpose the protest placards of years gone by. The messages have not changed and it’s likely no one would notice. So recycle those signs, please. We may want to use them again next decade.

Hey, at least it’s a step in the right direction.