If you build it, they will enroll

Roll the film back, please 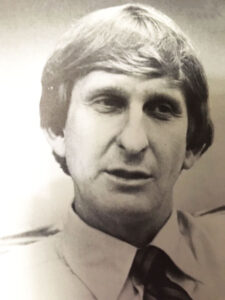 Everyone has an origin story, and my life as a film professor at U-M began in winter 1970.

I had just finished my PhD and was in my first year as a faculty member in the Department of Speech. My focus had been on film criticism, and I was hired to replace Professor Robert Davis who left in 1969 to take a position at Southern Illinois University.

It was an exciting and challenging time in cinema and academia. The counter-culture fervor of the 1960s had spurred student interest in the motion picture. Film societies sprang up on college campuses everywhere, exposing budding cineastes to artistic and socially significant American and foreign films. The Cinema Guild, Michigan’s first such society, had been showing films since the 1950s, initially in Lorch Hall’s old Architecture Auditorium. When I came to Michigan as a doctoral student, the Guild was screening retrospectives on directors D.W. Griffith, Frank Capra, Sam Fuller, and more. Filmgoers received printed brochures with a full overview of the director’s significance to film art. I still have my D.W. Griffith brochure.

As I reflect on these past times, I remember fondly that small group of men and women who were leading players in the origin story of film studies at Michigan.

Senior would be Marvin Felheim (1914-79), who joined the English faculty in 1948. As an academic, Felheim pursued varied scholarly interests: Shakespearean and Greek drama, popular literature, and culture. He directed the Program in American Culture from 1971-78 where he launched a revered four-part class to analyze the “American Genre.” He focused on westerns, comedies, musicals, and gangster classics. Cultural historian and film critic Neal Gabler was a graduate teaching assistant in Felheim’s class. 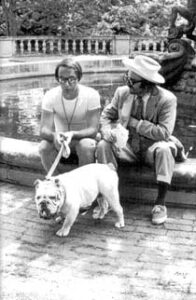 George Manupelli (1931-2014) came to what is now the Penny Stamps School of Art and Design in 1962. An award-winning avant-garde/experimental film director, Manupelli founded the Ann Arbor 16mm Film Festival in 1963. He wanted to provide an annual outlet for the fringe works of experimental and pioneering filmmakers. Andy Warhol, Kenneth Anger, Yoko Ono, Gus Van Sant, and Barbara Hammer submitted their early work to the festival.

In the mid-’60ss Manupelli participated in the ONCE Group, an avant-garde performance collective of dancers, musicians, filmmakers, and visual artists. When the ONCE Group disbanded, Manupelli turned to making his “Dr. Chicago” narrative trilogy: Dr. Chicago (1968), Ride Dr. Chicago Ride (1970), and Cry Dr. Chicago (1971). The trilogy recounts the escapades of a man posing as a medical doctor, abetted by a cohort of companions, with elements echoing the Once Group.

Peter Bauland (1932-2018) taught courses in the Department of English for 55 years. A scholar of German drama, Bauland joined the University faculty in 1964 teaching courses in Film as Literature, Screenwriting, and Playwriting. The Michigan Theater granted him permission to use its screening room as his class setting in his final years of teaching.

Robert Sklar (1936-2011) came to Michigan’s History Department in 1965 after receiving a PhD in the history of American civilization at Harvard. On arrival, Sklar accepted the role of faculty adviser to the Cinema Guild’s membership board, which nominated and voted on screening selections. That experience inspired Sklar to research and write a book about the history and significance of American movies.

I came to know him when he would come to my office to borrow 16mm films that I’d rented for my classes. His book Movie-Made America: A History of American Movies (1975) has never been out of print. Because of his meticulous research and cultural insights, many of us credit Sklar with helping to advance cinema studies as a  serious academic discipline. New York University’s Tisch School of Cinema Studies hired Sklar in 1977. He taught there for 33 years until his death in 2011 following a bicycle accident in Barcelona.

Diane Kirkpatrick (1933-) and Ira Konigsberg (1935-) came to Michigan in 1968, to the History of Art and English departments, respectively. Kirkpatrick’s academic credentials and course content included contemporary art, photography, cinema, and technological media. She served as chair of the History of Art Department from 1988-94. Konigsberg taught a variety of film classes, notably on literature and film. He also played a key administrative role as chairman of the newly created Department of Film and Video (1988-95). His 1987 book The Complete Film Dictionary is a vital work for motion picture scholars and students.

Hu Cohen (1930-) and I earned our PhDs at Michigan in 1970 and happily joined the faculty. Cohen was hired to teach in the College of Engineering’s Humanities Department and later in the Residential College. He segued to the Department of Screen Arts and Cultures in 1985. His popular film courses have included Writing Film Criticism and Art of the Film. This is Cohen’s 50th year teaching at Michigan. 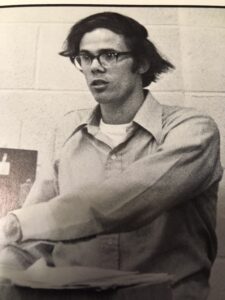 Alexander, a Harvard PhD, accepted an assistant professorship of English in 1971. A committed activist, his first class with film components involved a study of the Holocaust, Vietnam, Hiroshima, and Latin America as viewed through art. In 1990, Alexander founded and taught in the Prison Creative Arts Project (PCAP), an innovative program in which he and other professors led workshops for inmates in art, theater, literature, and creative writing.

McDougal joined the Comparative Literature Program in 1973 teaching cross-media courses in fiction and film. He authored the standard textbook on the subject, Made into Movies: From Literature to Film (1985). McDougal served as chair of the comparative literature program from 1982-97, an impressive tenure for a U-M chairmanship.

Montalvo was an award-winning filmmaker, industrial animator, and documentarist. He joined the now-Stamps School of Art and Design faculty in 1973 where he taught Film Production, Foundation and Industrial Design, and Drawing for 16  years.

Eagle, MA ’69/PhD ’73, earned his degrees in Slavic Studies and was invited to be a Junior Fellow in the Michigan Society of Fellows (1970-73). After teaching at Purdue University, he returned to Michigan in 1979 and has been an academic mainstay in teaching and research focused on European cinema, film theory, Russian and East European film, and semiotics. His research in these areas has been widely published. 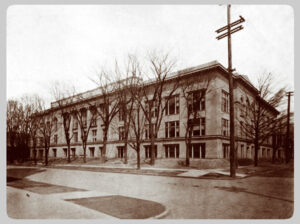 The Frieze Building had once been Ann Arbor High School.

In the early days, we all taught film in different departments and schools, which left us with rudimentary facilities and materials. I taught My Film Theory seminar in a standard classroom with no projection capabilities. For the Introduction to Film course, students met in Frieze’s Arena Theater. I lugged a 16mm Bell and Howell projector to each class. Thankfully, the Department supplied me with an undergrad projectionist, the wonderfully competent Shelley Kassman (Klein). My film production lab took place in a dressing room for athletes back when Frieze had been Ann Arbor High School. A defunct shower stall served as a dark room for loading and unloading 100-foot 16mm film reels.

A pivotal moment for film instruction at U-M occurred in 1972 with the completion of the Modern Languages Building (MLB) on the corner of Washington and Thayer streets. Each of the two auditoria on MLB’s first floor could seat several hundred students. Both were equipped with film and slide projection capability. Two smaller seminar-styled classrooms were sandwiched between the two large auditoria.

With more and improved teaching spaces, enrollment grew significantly in required and popular film classes. As the ‘70s progressed, the University outfitted other venues with auditorium seating for media use, notably in the south-end corridor of Angell Hall and in the Kraus Natural Science Building.

The action continued to pick up once the College of Literature, Science, and the Arts began providing projection service for film screenings and classes. Among those early indispensable assistants were Peter Wilde and the Moray siblings, Liz, Dan, and Anne. Dan is now a union projectionist at the Michigan Theater and Anne is a senior audiovisual technician at LSA’s Technology Services.

We always love to hear from Frank’s students. Who has some good stories from back in the day? Please share your memories of film studies in the comments below. — Ed.
In the ’70s, we had to get creative when sourcing films for our syllabi. Many of us rented 16mm prints of classics and historically important works from Films Inc., a reliable Chicago company. Blackhawk Films of Davenport, Iowa, sold reasonably priced one- and two-reel silent shorts on 8mm and Super-8 film (Keystone Kops and comedies by Charlie Chaplin Buster Keaton). Blackhawk also offered anthologies on actors and directors; they also had a healthy collection of silent pictures (Birth of a Nation, The Cabinet of Dr. Caligari, etc.).

Film options further expanded when the University of Iowa formed the Committee on Institutional Cooperation (CIC). It was a consortium of Big Ten universities that agreed to make available a large collection of 16mm films for inter-university loan.

U-M’s Audio-Visual Education Center (AVEC) at Fourth and William streets was another gem. The Center housed numerous documentaries and short subject narrative films: Nanook of the North, Triumph of the Will and the minutes’-long works of emerging French “new wave” directors Jean-Luc Godard and Francois Truffaut. Karen Sayer skillfully curated the center’s collection of newly released films for classroom use in consultation with the film faculty. 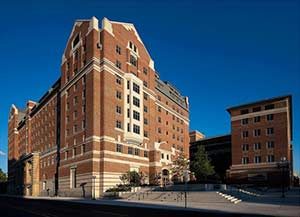 Here we are in 2020. The Department of Film, Television, and Media (FTVM) is the home of the Donald Hall Collection on the sixth floor of North Quad. Faculty members and students have access to more than 20,000 DVDs and 3,000 screenplays.

I retired long before North Quad opened in 2010, so I never was able to fully take advantage of its state-of-the-art film and video production facilities. That said, I have fond memories of that Frieze Building dressing-room-turned-film-lab.

So many wonderful students. I have no regrets.