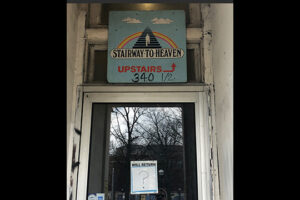 Stairway to Heaven on State Street makes no predictions about the end of this pandemic. Will Return: ?

The past several weeks have tested our collective sanity as humans. COVID-19, this novel virus to which none of us is immune, has taken more than 50,000 American lives as of this writing. Nearly 200,000 people have died worldwide.

We’ve all locked ourselves inside in hopes of staying well and protecting our frontline health care workers. It sounded like hell at first, but after several weeks, we’ve created something akin to a routine.

The University of Michigan and Ann Arbor comprise a brilliant community of scientists, professors, and researchers. In the past 200 years, this community has accomplished tremendous breakthroughs — especially in crisis, and especially when it comes to the deadly influenza. As alumni, you should have confidence that the collective genius in your college town is firing on all cylinders. A solution to this problem will come, even if we don’t know when. 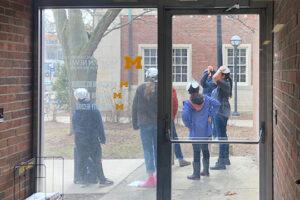 Tin hatters outside the Michigan News Building in March 2020.

In the meantime, it’s a little creepy driving the deserted streets of our town on a beautiful April afternoon. Where normally one would see front lawns littered with red cups, we see signs saying “Thank you, health care workers.” The distorted, overly loud speaker announcing your pizza at Dominick’s has gone as silent as the 2020 Sangria season. M-Den is even offering curbside pickup if you need a new t-shirt that says, “Go Blue!” in Polish.

Not surprisingly, conspiracy theorists are politicizing and protesting against this equal-opportunity public-health crisis. In fact, in the days prior to Gov. Gretchen Whitmer’s decision to shut down the state, a group of actual “tin hatters” assembled outside the Michigan News office. They were holding signs, dragging luggage, pointing at the sky, and recording things.

Wait. This was Ann Arbor! Had I entered the “Twilight Zone?” Had the aliens landed? Would Spielberg suddenly yell “Cut,” and save us all?

When nothing like that happened, I called my boss, who already was working from home.

“Ask them what they’re doing,” she said.

Clearly, that’s why she’s the boss.

I put on my gloves and covered my face in a scarf. On the ruse I was running an errand, I introduced myself. They told me they were filmmakers wrapping a student project before being forced to leave town. I was simultaneously heartbroken for them and relieved for the rest of us.

We have no need for conspiracy theories right now. We must fight to save and protect everyone we can. And we need that tin foil to freeze our provisions.