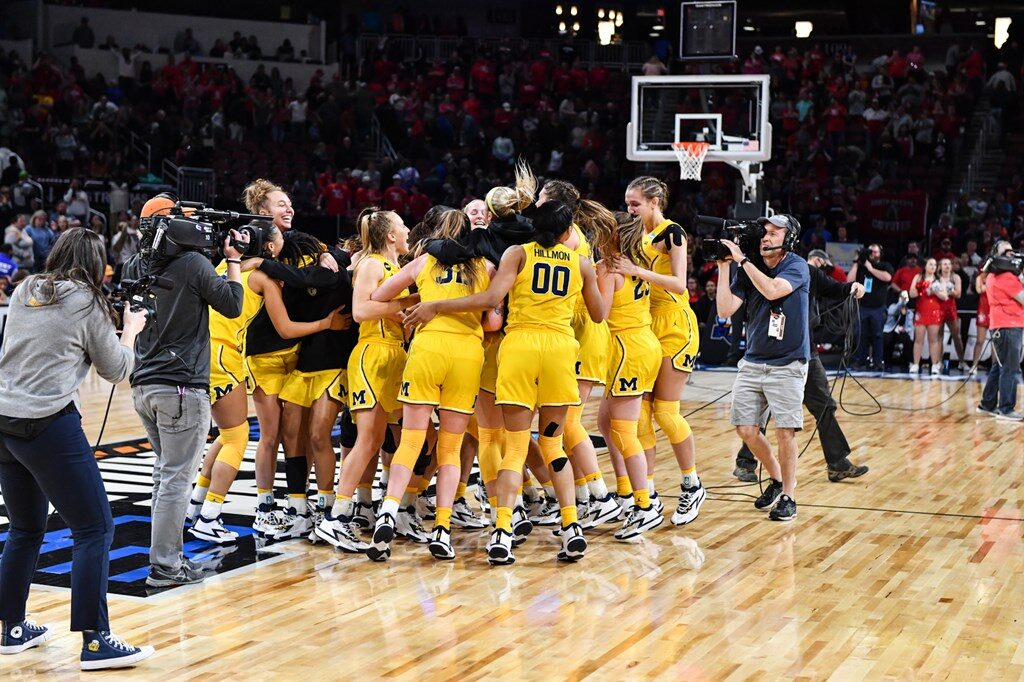 Known among certain intimates as “Calamity Jane,” I type this missive with one pecking finger at a time. I’ve just been released from a cast after breaking my left wrist in mid-March. I slipped — cartoon-like — on the last patch of existing ice in Ann Arbor. Let’s just say, it’s not the first time… This four-eyed asthmatic kid broke her glasses playing dodgeball in Catholic school and her 7th-grade wrist playing basketball during a rainy indoor lunch hour.

This may explain my love of watching, never playing, team sports — particularly college sports, and specifically basketball. I live for the NCAA championship each year, no matter who’s playing. March Madness is my jam.

March 2022 was sweeter than ever. Women’s head coach Kim Barnes Arico took the Wolverines to the Elite Eight for the first time in program history. With extraordinary senior Naz Hillmon as their North Star, this team seemed destined for a championship title. The athleticism, the competitiveness, and, frankly, the joy were infectious. Take a look at their Instagram account, umichwbball. 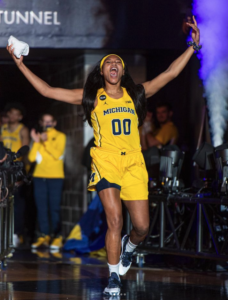 In a world spiraling into darkness, that account delivers pure light. And much of that light exudes directly from Naz Hillmon herself. Leadership oozes from her pores. She embodies strength, confidence, and self-assurance. Plus, she’s just super fun to watch. Fast, bold, unafraid. In fact, Coach Barnes Arico, Hillmon, and the team made program history, taking the Wolverines higher than they’d ever been. Pandemic and all.

Louisville denied them the ultimate win, but you would never know it by the team’s collective response. During the post-game press conference, point guard Danielle Rauch personified the team’s ethos in response to a reporter’s question for the “losing team.”

“I didn’t know if I was ever gonna play a minute at Michigan and I just played in the Elite Eight as a starting point guard for this university,” Rauch said. “Michigan women’s basketball history is not written that way and we made it that way. Leaving this four years and knowing the impact our class had, I wouldn’t trade anything I went through to get to this point. Playing next to Naz — an All-American, she’ a once-in-a-lifetime-player — I got to play with the greatest player in Michigan women’s basketball history.”

Hillmon, recently drafted to the WNBA’ Atlanta Dream, leaves Michigan as the most decorated player in program history. She is the program leader in rebounds (1,063), double-doubles (52) and free throws made (487) and is the only player to record 2,000 points and 1,000 rebounds in a career. She is second all-time in scoring with 2,183 points, playing 21 fewer games than all-time leading scorer Katelynn Flaherty (2,776). Hillmon was named a first-team All-American this season by the WBCA, Associated Press, USBWA, The Athletic, Sports Illustrated and the Wooden Award. She was a first-team All-Big Ten selection for the fourth straight season and was named to the all-defensive team.