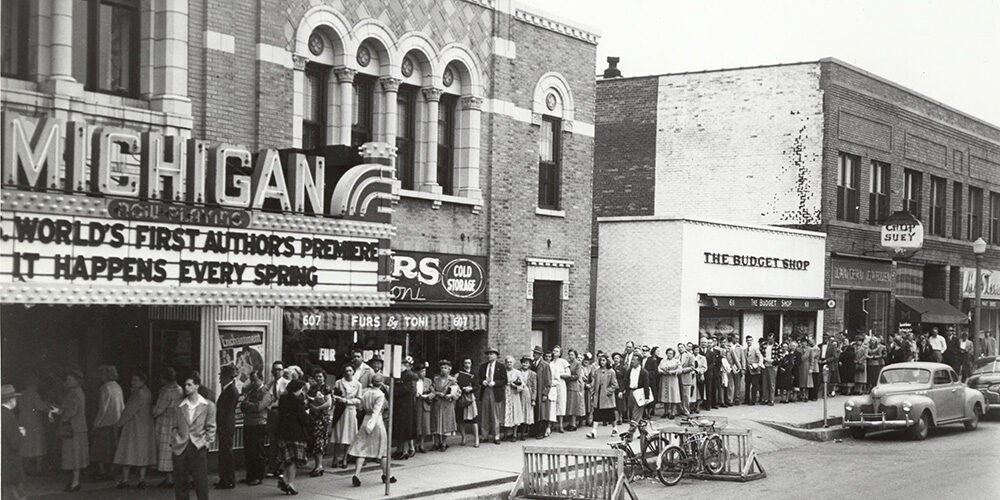 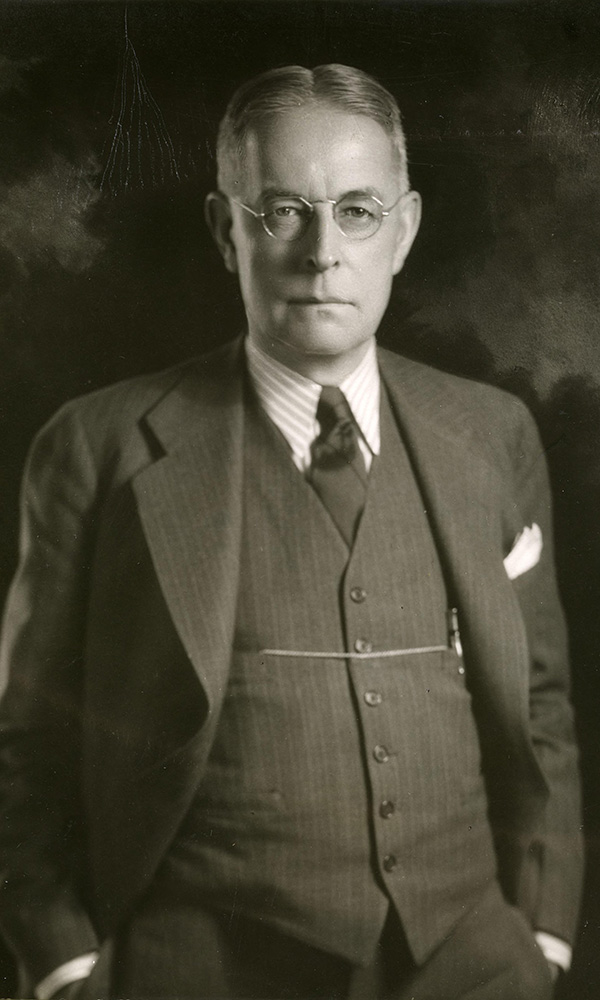 One evening between the world wars, Shirley Wheeler Smith, the University’s vice president for finance, stood up at a University Club dinner and recited a story he’d written. It went like this:

There was once a very junior instructor in the Chemistry Department named Simpson. In high school, he had yearned to pitch in the Major Leagues, but a weak arm had consigned him to an unpromising career in the lab.

One morning, Simpson discovers that a baseball thrown by a careless student has crashed through his window and ruined his latest experiment. He picks up the ball but it slips from his hand into a sink half full of chemicals. Retrieving it with tongs, he drops it again — then stares.

The ball, falling toward a wooden ruler on the concrete floor, seems to leap sideways to avoid the ruler. Simpson drops the ball toward the ruler again, and again the ball dodges the wood. And “in this simple fashion arrived the great idea of Simpson’s life.”

Simpson bottles his accidental mixture, presents himself to the fifth-place Panthers of the National League, and wins a try-out. Within weeks, by secretly applying a drop to each ball he pitches, he is the wonder of the game. As the season moves toward autumn, his elixir runs lower and lower, until Simpson faces his final test in the seventh game of the World Series.

Years later, in 1946, the editor of U-M’s “Quarterly Review” remembered the tale and asked Smith if he might publish it. Smith titled it “The Sprightly Adventure of Instructor Simpson,” got the pleasure of seeing it in type, and thought little more about it.

Until, that is, the spring of 1947, when his friend Valentine Davies, a U-M graduate of 1927 and screenwriter of the hit Christmas movie “Miracle on 34th Street,” happened to read “Instructor Simpson.” He wrote Smith to say the story might be just right for the screen.

“A steady job as a nobody”

This ad in the Michigan Daily described the film as “dipsy-doodle.”

Shirley Smith’s resume hardly looked like that of a writer.

Born in 1875 in the west Michigan village of Nashville, he had earned his bachelor’s degree at U-M in 1897 and promptly joined the faculty as a junior instructor in English. But in 1901, President James B. Angell pulled him out of the classroom and made him secretary of the Alumni Association.

A few years later, after a stint in a life insurance company out East, Smith was back in Ann Arbor as secretary of the University — the campus’s behind-the-scenes, all-purpose administrator. Before long he knew everybody in town, kept their secrets, and made the trains run on time. In 1930, he was named U-M’s vice president and chief financial officer.

Was it a glimpse of Smith’s own self-image when he described instructor Simpson in “Sprightly Life” as “not a brilliant man”?

“He worked for what he got,” Smith said of Simpson. “The Dean told the President, and the president told the Board, when his name came up at all, that though he was a good teacher … he lacked imagination and initiative … He might have been somebody if Fate had not given him a steady job as a nobody.”

Smith was hardly a nobody at U-M. On all sides of the Diag his advice was valued and his work esteemed. But it’s clear that the urges of a writer — apparently of a pitcher, too — stirred beneath his gray flannel suit.

“Impossible and quite fantastic”

Davies turned Smith’s short story into a movie synopsis, sold it to Twentieth Century-Fox (promising Smith half the proceeds), and wrote a screenplay titled “It Happens Every Spring.” When the star Ray Milland signed up to play Simpson, the project was green-lighted.

Then Albert “Happy” Chandler, commissioner of baseball, refused all major-league cooperation. After all, he grumped, Smith and Davies were glorifying “the story of a cheat.”

The studio tried to appease Chandler by promising a disclaimer with every showing: “The adventures of Mr. Vernon K. Simpson … are purely imaginary. Because they violate both the rules of the game and the law of nature, the things he does are impossible and quite fantastic — like so many other things that happen every Spring.” But Chandler stood firm, so the moviemakers used phony team names — and still got access to Los Angeles’ minor-league Wrigley Field.

An “Author’s Premiere” was set for the Michigan Theater on May 12, 1949 (see lead image). Mayor William E. Brown, Jr. proclaimed it “Shirley Smith Day.” Davies came in from Los Angeles but insisted on a low profile. The event, he said, should be “a great tribute to Shirley Smith,” who had just retired at 74.

Gerry Hoag, manager of the Michigan, made plans to preserve Smith’s footprint in cement in the theater lobby. Smith, appalled, said no. “As a small boy I used to walk in wet cement,” he told a reporter, “but I’m too old for that now. I won’t leave footprints on the sands of time, much less in a theater lobby.”

Afterward, he wrote a friend: “The celebration and tumult have died and I am now just another Smith in our town. However, the memory will linger a long time. There was an embarrassing moment now and then, but nothing that even flyspecks the recollection as a whole. The movie itself, as Val [Davies] wrote it and as 20th Century Fox put it on, seems to have pleased everybody.”

Not the New York Times’ reviewer, who called “It Happens Every Spring” a “hopeful little picture” that mistakenly assumes “the ludicrous spectacle of a batter swinging wildly at a ball which trickily dodges his bludgeon is funny innumerable times.”

Even so, the movie was nominated for an Oscar for “best motion picture story.”

Hardly anyone, it seems likely, recalled the end of Smith’s original version, where he recounts Simpson’s later years as an aging tenured professor.

Smith’s lead character had tried but failed to replicate the chemical mix that lifted him to the big leagues. And he never puzzled out “why the world, in that summer of his sprightly adventure, should have paid him fifty-seven times as much for throwing a little five-and-a-quarter-ounce ball past a wooden stick as it had been willing to pay him for developing its most valued possession, the youth of the land, in one of the world’s most cherished institutions, an ancient and honorable university.”

Lead image: May 12, 1949 — Moviegoers line up on Liberty Street for the premiere of “It Happens Every Spring.” Editorial sources included the papers of Gerald Hoag at the Bentley Historical Library (with thanks to archivists Brian Williams and Gregory Kinney); Cameron Stewart, “Secretary and Screenwriter,” Stories of the Staff ; American Film Catalog of Feature Films: The First 100 Years, 1893-1993; and the Michigan Daily. “The Sprightly Adventure of Instructor Simpson” appears in the digitized version of the Quarterly Review of the Michigan Alumnus.