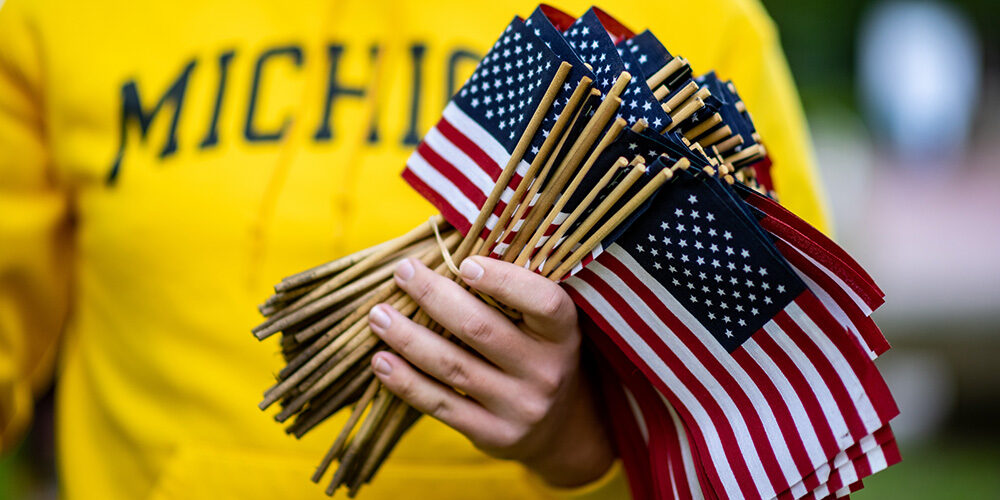 Biography of a song

A compelling character study requires certain literary elements. The plot tends to involve conflict, resolution, and growth. The character often embarks on a transformative journey (metaphorically or literally). And by story’s end, the character’s behavior has illuminated some universal truth about the human condition. 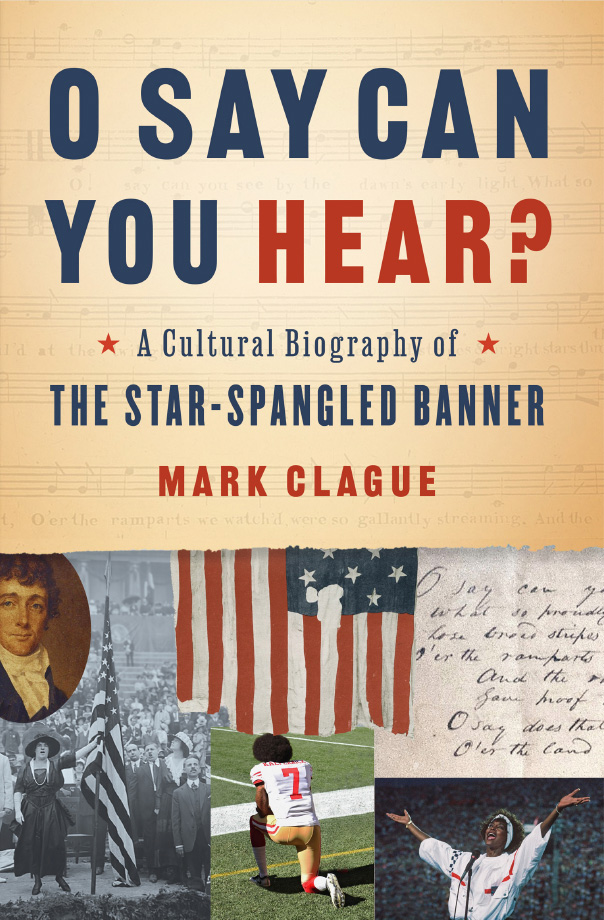 The lead character in O Say Can You Hear? A Cultural Biography of The Star-Spangled Banner (W.W. Norton & Company, 2022) brings all those elements to the page. It’s not a person, however, but our national anthem.

“The anthem is a witness to history, and it just happens to be immortal,” says author Mark Clague, associate professor of musicology and American culture at U-M. He also is associate dean at the School of Music, Theatre & Dance, and co-director of the American Music Institute.

Clague’s book, a decade in the making, is just one of many banner-related projects produced by this musical historian. There are audio recordings and concert videos to showcase the anthem’s rich musical heritage. Clague has contributed to exhibits at the Smithsonian Institution and the Star-Spangled Music Foundation. Over time, he has come to see the anthem not as a composition, but as a living and complicated hero. Even after some 200 years, the anthem courted national controversy as San Francisco 49ers quarterback Colin Kaepernick kneeled in protest during a 2016 performance.

“Once the anthem became a flashpoint in our current culture war, the project became bigger and more urgent,” Clague says, “and my book really became ‘what does democracy mean and what does being patriotic mean?'”

Luckily for him, “The Star-Spangled Banner” provided all the answers.

When Francis Scott Key wrote his famous lyric during the War of 1812, “his intent was not to inspire endless repetition of a static symbol and its unchanging story,” Clague says, “but rather to task Americans with the responsibility of composing the nation’s future.” Clague found the anthem to be a surprisingly rich archive into the conflicts and complexities that forged U.S. history. The song’s enduring resilience mirrors the nation’s experience, he says.

“The most important word in the anthem lyric is ‘you,'” says Clague. “It draws us in. It’s an invitation to citizenship. And then, the anthem literally ends with a question mark. It’s not simply observing a triumphant nation but serving to build one.” 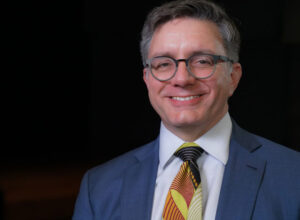 The book is filled with new anecdotes and original research, including 100 undiscovered translations of the lyric. Clague reveals little-known nuances of Key’s personal life (a slave owner who also fought to free enslaved people), which he transposed against an examination of the modern-day Black Lives Matter movement.

Prior to his deep dive, Clague said historians had identified about 70 alternate lyrics for the song, including abolitionist themes. He discovered 500 more: “Each lyric is a little adventure in American history.” He also learned details of how the British “broadside ballad” found its way from the U.K. to our shores — in the company of British actors, of course.

“The book is deeply personal to me,” says Clague, who was 9 years old during the nation’s Bicentennial. “I fell hook, line, and sinker for the vision and the idealism of the nation. And I have spent a lot of time thinking about what it means for us right now.”

As the January 6 hearings unfold and the American people – and government — grapple with a nation more divided than ever, Clague’s book offers valuable context. “What’s happening now is not unprecedented,” he says.

As he writes of the anthem: “When its performances elicit dissonance — for example, by calling for unity at a time when one group of Americans has been singled out as disadvantaged — our sense of being one nation is instead disrupted, creating a crisis in patriotism. For democracy to function well, such community dissonance must be heard, recognized, and resolved. It is through this potential to make social dissonance audible and thus to demand change that ‘The Star-Spangled Banner’ exercises its social power.”

Clague currently is working on an anthem lyrics database that will serve as a primary research source to help K-12 students and other scholars connect with American history through music.

Below, the author elaborates on a series of quotes pulled from O Say Can You Hear.

Key’s lyric is not only an allegory of democracy; it serves as a primary document, a living record of the American experiment in flux. It is an act of civic creativity that came to serve as a symbol of the nation.

“Democracy is only as strong as the people’s commitment,” Clague says. “It is something at risk that has to be reinvented over and over. The word ‘you’ when we sing the lyric ‘O say can you see,’ puts you in relationship to a moment in history, and in relationship to the country. It makes the anthem personal. It recruits the individual to invest and become part of the nation. And that first verse ends with a question mark. If we take democracy for granted, we lose it. And I think that’s more present today than ever before, certainly in my lifetime.”

“So many people see patriotism as, ‘Our team is patriotic and the other team is not,’ or that protest is un-American,” says Clague. “Francis Scott Key created a vision for a nation that didn’t yet exist: a unified nation, a powerful nation, a pious nation. We were at war with Britain at the time. Washington, D.C., had just burned to the ground. We were at a nadir in terms of our national pride. And Key was envisioning a powerful, ‘united’ states, right? But that wasn’t what he was experiencing in his daily life.” 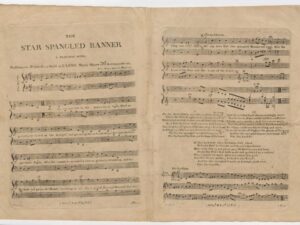 An anthem, like patriotism itself, must necessarily be a contested but inclusive space in which devotion to the whole is put into practice. Patriotism must be accessible to all as a shared dedication to make the nation better.

“The lyric from its onset is a protest song. Protest is part of the song’s history. The devotion to the country doesn’t mean you don’t protest. In fact, protest itself is an act of love, an act of belief, an act of hope that the nation can live up to its ideals. When Colin Kaepernick kneeled, it really changed the conversation around the anthem. He really challenged me as a scholar and historian to take this head on. And then, of course, the results surprised me. It just gets more and more complicated as we go,” Clague says.

As Martin Luther King, Jr., said in 1968, at what tragically would be his final speech, “All we say to America is, ‘Be true to what you said on paper,'” referencing the Constitution. America could likewise be true to its anthem.

“At the very beginning of the Civil War, a Massachusetts regiment was protecting the Capitol, but there were no barracks for the soldiers,” Clague says. “So they used the halls of Congress as their sleeping quarters. There’s a story about the Union troops singing those last few lines: ‘O say does that Star-Spangled Banner yet wave, O’er the land of the free and the home of the brave?’ as a kind of chant echoing throughout the halls of Congress. When I saw the Confederate flag in the Capitol on January 6, it came as quite a contrast. Even during the Civil War, that flag was not allowed in that sacred space. And yet, it has now happened.”

America’s shortcomings give its triumphs meaning. To sing Key’s song today is necessarily to understand how in the past the American nation has confronted the horror of racism, the bias of gender discrimination, the toxicity of anti-immigrant jingoism, the pangs of economic inequality, and the suffering caused by virulent nationalism and how the community must continue to challenge every such injustice. It is also to understand the moments of bravery, integrity, and sacrifice that have kept the nation viable and intact.

“It’s interesting to watch the fights over how American history is taught. We need to understand the bleak parts of history, the times we’ve been on the wrong side of justice. At the same time, the fact that we’ve overcome them shows a kind of triumph, even if it’s only momentary and we have setbacks. The triumphs have meaning because of those challenges. And you can’t have real pride without the courage to confront the problems. Patriotism requires the embrace of the complexities of American history. Ours is not an easy, feel-good story,” says Clague.

To understand “The Star-Spangled Banner” is to know its fantasies and flaws, the bias and privileges of its era and its author, and its dreams of future possibility. Key’s song is not an endpoint but a contribution to an ongoing conversation about the country and how it might aspire to realize its potential.

“There are literally more than a hundred translations of the anthem, so if there’s one sort of core artistic characteristic of the anthem and America, it’s resilience,” says Clague. “Every performance is different. That resilience gives me confidence that we can navigate through [the nation’s current crises], but only if people get involved. And that’s why it’s important to emphasize that question mark at the end of the first verse. The anthem is a call to citizenship, not a sacred icon that is passive and dead. This is something alive and urgent.