A gift from the editorial gods

Andrew Sacks, AD ’69, is a photographer, filmmaker, and alumnus of the Michigan Daily. He worked at the paper in the late ’60s, photographing all manner of student protest and campus unrest. One of his images from that time captures a most precious moment of grace, as Sacks calls it. 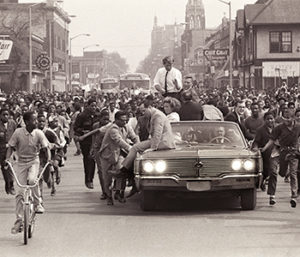 Aspiring presidential candidate Bobby Kennedy had passed through Detroit in May 1968, and as the images from that day show, he enjoyed a joyous reception from the crowds. The setting made for breathtaking visuals as Kennedy’s open-air motorcade snaked its way through a sea of smiling faces, mostly African American.

One photo in Sacks’ collection stands out: RFK locks eyes with a tiny girl, about 5, who is being held aloft in a seemingly giant hand. The child is not intimidated by the chaos surrounding her. It’s as though she’s drawn to the candidate, mesmerized by his eyes, his smile, his kindly demeanor. I’ve written about Sacks and that day before. I’ve even written about that image.

And every time I reviewed those photos, I was overwhelmed by the sea of faces. Who are all those people in the crowd? Whatever happened to them? What stories do they have to tell?

And then I opened my email to see this note from Sacks:

“You may be interested to know that the little girl I photographed with Bobby Kennedy in May of 1968 called me a few weeks ago. Alive and well, she heard from her brother in Detroit that he had spied her in a photo used in a film documentary about Senator Kennedy.”

Now that, people, is what we call a gift from the editorial gods.

Read on to find out what happened next. You couldn’t make this stuff up.