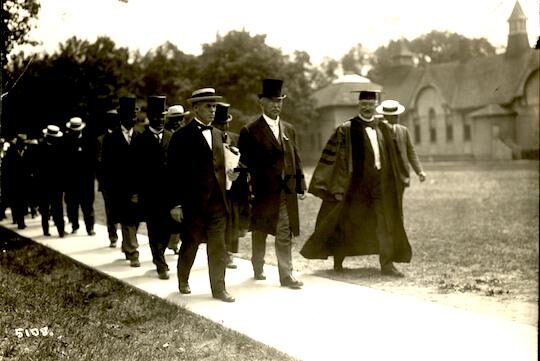 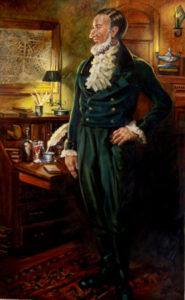 Before I was editor of Michigan Today, I was a reader and fan. I always favored the history features, and clearly remember a day sitting at my desk at Michigan Ross reading “One Odd Duck.” I was charmed first by the headline and then by the profile of a hook-nosed Augustus Brevoort Woodward, friend to Thomas Jefferson himself, in a puffy shirt worthy of Prince Rogers Nelson.

I grew up in Birmingham, just a few blocks East of Woodward Ave., and had never pondered the genesis of the road’s name. And now, years later, there was the guy, the “one odd duck” who dreamed up the word Catholepistemiad (pronounced cath-oh-lep-iss-TEEM-ee-add) as the potential name for the University of Michigan. The story describes him as a land speculator, accused of “private and sinister schemes,” and though he escaped serious scandal, he was unpopular for years.

According to a historian quoted in  the piece: “He was the most interested in purely intellectual pursuits of any man at that time in Michigan and found few to sympathize or appreciate him or his endeavors.”

Even so, I was glad to finally meet him after all these years.

Time travel is a recurring fantasy of mine, and I  welcome any opportunity to immerse in another period. University of Michigan time travel never disappoints. A trip through the photo archives at the Bentley Library delivers one fantastic gem after another. Men in stovepipe hats on the Diag. Grand ladies on the steps of Hill Auditorium. BAM protesters with picket signs. Every person in every photo was here at one point. They were animated and three-dimensional and alive. They were this place at that time. 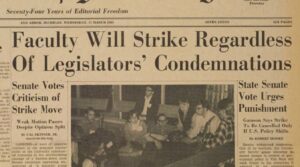 Meanwhile, the digitized archive of The Michigan Daily is by far one of our most precious time machines. (Once you find it, the rabbit hole is deeeeeep and utterly irresistible.) Student journalists always have access to infinite possibilities and the stories always come fast and furious. Our campus(es) represent a microcosm of society and the interesting stories to which readers are drawn have recurring themes: bad behavior, obstacles overcome, dramatic discoveries, creative breakthroughs. (And let’s be real: bad behavior trumps everything.)

In his time, Augustus Woodward was considered a bit of a kook. But as Michigan Today pointed out some 200 years later, he actually was something of a visionary. These past few years at U-M will provide robust fodder for the future editors of Michigan Today. Imagine the “Heritage” stories a hundred years hence. How will future historians cover the ways we’ve handled a deadly global pandemic, a fractured political system, and bad behavior in our community? It’s mind-boggling to realize we are all part of this living, breathing organism called U-M, and that someday our present drama — these “interesting times” we are in right now — will be considered ancient history.